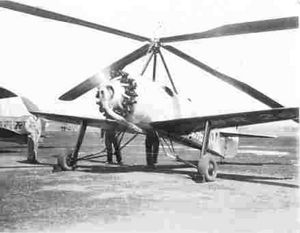 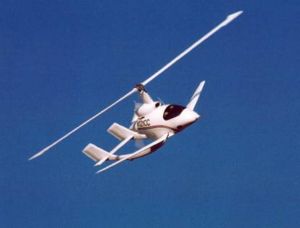 Autogiros (*here* also known as autogyros, gyrocopters, gyroplanes) are much more common in IB than they are *here*.

Invented in 1920 by Juan de la Xierva, their "fail-safe" unstallable design and simplicity of construction (as compared to helicopters) gained them much greater acceptance in IB than they have enjoyed in our timeline, especially since the Dornburg Disaster.

In IB, autogiros fill many of the roles that are *here* filled by helicopters, including police work, news reporting, search-and-rescue, local express mail couriers and medevac aircraft among its civilian uses, and including some of the scout/reconnaissance, anti-submarine and ground attack roles of the helicopter in its military uses.

The first and premier manufacturer of autogiros is the Xierva Autogiro Company. Others include the FK's Wessex Aviation and Kamov of the Russian Federation

Autogiros use a rotor to develop lift. The rotor is driven by aerodynamic forces in autorotation. An engine-powered propeller, similar to that of a fixed-wing aircraft, provides thrust. The rotor blades are angled so that they not only give lift, but cause the lift to accelerate the blades' rotation rate, until the rotor turns at a stable speed with the drag and thrust forces in balance. Pitch control is achieved by tilting the rotor fore and aft; roll control is achieved by tilting the rotor laterally (side to side).

Later developments of the autogiro included a motor attached to the rotors to "spin up" the rotor allowing vertical take-off. This motor could also be engaged in mid-air to allow the autogiro to hover for brief periods. Technically known as "girodynes", this type of aircraft, part way between helicopter and aurogiro, are considered a specialised type of autogiro in IB. They are becoming increasingly in-demand for roles such as mountain rescue and other areas requiring some hovering ability, and most autogiro manufacturers include at least a few models of this type.

Further experimentation with this concept led to the development of the helicopter by Dalmatian aviation engineers.

Giroport is the word used for an aerodrome specifically designed to handle autogiros and girodynes. The landing pad of a giroport is the giropont, or in some Romance languages, giroponto.