The Justice Club of America (JCA) is a fictional team of superheroes in the Millennium Comics universe. Debuting in 2001, they have proven very popular and were the featured characters in two comic book miniseries. 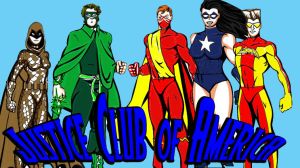 The Justice Club of America

There are five full-time members to the JCA. All five came together when the Legion of Light and Sisters of Justice were busy at the same time, so were not available the minions of the Doctor Zee (a wheelchair-bound telepath) sought to steal Millennium City’s greatest treasures. Given that none of the five had ever gotten much respect from the other super-heroes, they formed their own group:

After defeating Doctor Zee, the main adversaries of the JCA has been Revengers, Inc., an evil corporation determined to one day rule all of Millennium City. Although the corporation has employed countless super-powered minions (although never the first rank, because, after all, they are on a budget), the consistent leaders number three: