The flag of Iraaq refers to five different flag designs since 1920 which represented Iraaq as an independent country.

Modern day Iraaq as a unified political entity was born in 1920 after a widespread rebellion against Ottoman domination. This rebellion soon became an inter-ethnic conflict and let the country in a complete chaos.

The situation got so serious that the League of Nations mandatated the Federated Kingdoms to pacify the region and to prepare it to future independence.

During the next year FK military administrated the so-called Mesopotamian Mandate or State of Iraaq. As the country wasn’t meant to be a colony it was granted its own flag which became the first of Iraaq.

This flag was basically a white crescent and star over a green background. Due to its resemblance to the ottoman flag it never got acceptation from local nationalists.

The administration of Iraaq proved to be a terribly harsh task and a military disaster. In 1921 the FK forces left the country. Iraaq was then ceded to the most important FK ally in the Middle East, King Faisal I of the Hijaaz. 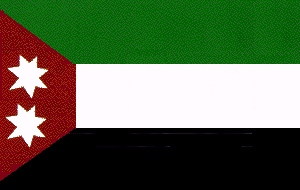 Under Faisal I Iraaq adopted a new flag replacing the unpopular previous one. The new one was strongly inspired by the flag of the Hijaaz and the Arab Rebellion (1916-18).

In fact both flags could be easily confused as they used same exact colours and had a resembling design. While the flag of the Hijaaz had an equilaterals red triangle in the hoist and three horizontal bars (from top to bottom: black, white and green) Iraaq new flag was a green-white-black tricolour (from top to bottom) with a red trapezoid in the hoist with two 7-pointed white stars.

This flag would be used as national flag during most of the Hashemite rule, until 1958, and by the Iraaqi Government in Exile, from that year until its dissolution in 1968.

Iraaq and Hijaaz shared same colour symbolism in their flags. This is explained as they also shared the same king and both countries were in personal union by then.

Red symbolised the Hashemite dynasty, green the Fatimid dynasty, white the Umayyad dynasty and finally black the Prophet Muhammad. Such symbolism had its appearance during the Arab Rebellion and became the symbol of Arab nationalism and Pan-Arabism.

The two 7-pointed white stars from iraaqi flag symbolised the fourteen provinces of Iraaq (nowadays they are fifteen). 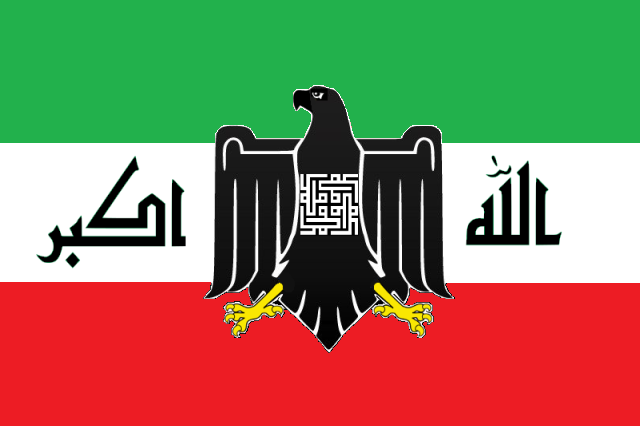 King Ghazi I succeeded his father in 1933. Since 1935 Ghazi experienced snorism adapted to arab culture and reality. The Iraaqi flag was once again changed as a reflection on the style of government changes, from a traditionalistic arab absolute monarchy to a monopartidary snorist-like dictatorship.

The new flag kept the colours but changed its design. The stars were replaced by a SNOR-styled roc (or rukh) representing strength in replacement of the provinces. Iraaq was meant to be a unitary state with no place for local or provincial symbolic. Also was added the “takbir” for the first time written in traditional kufic font in black [الله أَكْبَر (Allahu Akbar, or in English Allah is great)]. The choice for kufic script had a strong reason. Such old script has been created in iraaqi city of Kufa and was used on first copies of the Koran.

The snorist flag was kept until Ghazi’s mysterious death (1939) and after that the 1921 flag (so as the traditionalistic absolute monarchy) was readopted. Today this flag is still used by snorist iraaqi political parties.

The Hashemite rule was deposed in Iraaq by General Qassim in 1958. A new flag was needed to cut with the Hashemite legacy.

The new ruler’s flag was now a horizontal tricolour (from top to bottom: red, white and green). In the white bar were added three green 5-pointed stars representing the Shia Arabs, the Sunni Arabs and the minorities (Assyrians, Turkoman and others). Also was re-added the “takbir” in red, this time symbolising a point of Muslim solidarity and pride.

The new flag colours changed its symbolic. Red wasn’t now the Hashemite but the blood of the iraaqi heroes, who struggled for freedom, the white stood now for peace and green for Muslim religion.

Qassim was a pan-arabist and some resemblances to the United Arab Rebublic flag weren’t just a coincidence.

The rise of Sheik Hussayn

Saddaam Hussayn raised in the government ranks during the 1970’s. At the same time Qassim’s socialist inspired regime was progressively turning to religion. Although not official a new flag for Iraaq started to appear and to be often present.

It was quite similar to the official one (adopted in 1958) in its colours and design. But with no stars. The “takbir” was kept but now had in the middle a red crescent.

In 1979 Sheik Hussayn deposed General Qassim and instituted a religious regime. The 1958 flag was soon abandoned and replaced by its version with a crescent.

Hussayn was deposed in a bloodless coup in 2003. Although his fall the crescent flag remained the national flag of Iraaq. But since 2003 is being going a discussion about changing the national symbols to cut with dictatorial decades now that democracy was achieved.