The Central Bureau of Investigation (CBI) was created in 1899 by an Act of Parliament. Initially it was supposed to provide assistance to local constabularies in the enforcement of national laws within the NAL, but has grown since them to being primary law enforcement organization as well as gaining responsibility for security of Parliament, the Cabinet, the GM and the High Court.

Seal of the Central Bureau of Investigation

Sometimes called "The Fifth Branch" (of the military) or the "Red Berets."

Joining the CBI proper requires graduation from the three-year Academy in Stone Mountain, outside Atlanta, Jacobia. Graduates must pass a rigorous training schedule that includes fitness, combat, law, modern forensics as well as at least one specialized major. Among those majors offered are medicine, bookkeeping, chemistry and psychology.

Graduates of Stone Mountain are termed Special Agents which is the lowest rank within the CBI. Although in the field most CBI personnel chose to wear plain clothes, there is a uniform. Donning either the dress or gala uniforms is only required at certain events, although traditionally many senior officials were the work dress uniform on a day-to-day basis.

The work dress is a simple charcoal gray, with little to mark it a uniform save the cut and rank insignia (usually worn on the lapel or collar).

The parade dress consists of a double-breasted cardinal red coat with black trousers and black shoulder boards. The trousers have a red stripe on the outside.

Both uniforms have a red beret. 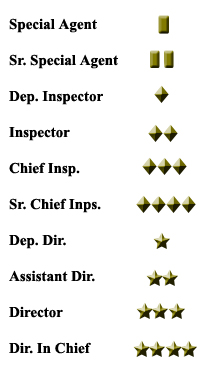 Ranks within the CBI are:

Armed guards outside of Parliament and other installations are usually in parade dress. Such also accompany the GM on official visits (as well as undercover security agents).

The CBI's juristiction is (1) Criminals who have fled across provincial borders, (2) Crimes that have been committed in more than one province, (3) Crimes which violate League--as opposed to local or provincial--law, (4) Security for NAL National offices of a non-military nature. They have a long standting rivalry with the National Intelligence Office regarding counter-intelligence and espionage within the borders of the NAL.

In theory, the CBI is supposed to coordinate with provincial law enforcement whenever possible. This is actually done rather more often than some assume.

Beginning in the 1970s, the CBI has been influential in developing what they term "Offender Analysis", a technique to derive from details of a crime strong probabilities about the offender. The Offender Analysis Division has become one of the more prestigious departments within the Bureau following successful investigations regarding several serial killers.