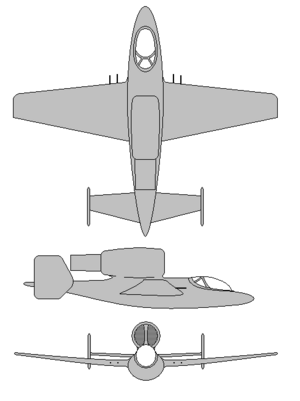 Despite a clear Dalmatian technological advantage when it comes to aviation, the Russian Empire/Russian Federation was actually one of the first nations to deploy a jet fighter.

Rumours of the development of a revolutionary new aeroplane engine by the Sokol military aircraft company had been coming in from Russian spies in the CSDS and Mali since the early 1980s, and the Russian high command was worried. However, the Dalmatian Civil War broke out in 1987, and in the chaos that ensued, the Russians saw their chance.

In one of the world's greatest espionage coups, Russian agents managed in 1988 to steal a very complete set of blueprints for the engine intended for the Spretu Mk.I and smuggle them all the way back to St. Petersburg for study.

With their top aviation engineers poring over the blueprints, the White Council tasked both the LaGG and Yankov design bureaux to come up with a new Russian jet fighter built around the new engine that they had acquired the design for. However, just after this, the whole Snorist system began to unravel.

LaGG's integrated, entirely new design apparently disappeared in the upheavals that followed the end of the SNOR regime. Several wildly divergent purported designs for the "lost LaGG jet" have surfaced in recent years, but it is unknown whether any of these represent the actual proposal.

However, the Chelyabinsk-based Yankov team were somewhat insulated from the worst of the troubles by that republic's continuing SNORist government, and continued to work on their simpler design. The Yankov design was basically a rebuild of an older Yan-2 training aircraft. The pilot was moved forward into the old engine compartment, and the new jet engine was piggybacked on top of the aeroplane. This "engine-amidships" layout had some advantages, notably that the centrally-located centre of gravity aided manoeuverability. However, the most obvious drawback was the likelihood of a pilot bailing out directly into the jet's air intake; the Yankov design team got around this by installing a rocket-assisted ejection seat for the pilot. The other main drawback of this design - lack of visibility to the rear - can not be so easily worked around, however.

The neo-Snorist Chelyabinsk government, in a fit of pro-SNOR thumbing their noses at the rest of the world, decided to give the name "Orel" to the new jet fighter – this is the Russian word for "Eagle", an obvious Snorist reference.

Yankov has sold the new jet all over the Russian Federation, and also to some of the other former Snorist states; however, supply problems and ideological reasons have prompted some (notably Oltenia and Turkestan) to develop their own jet aircraft, either instead or as well.