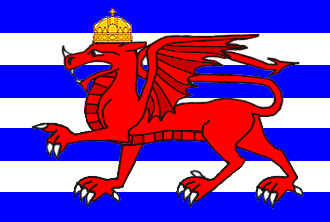 Just wanted to drop a line to say I like how this is progressing. I actually started introducing super-heroes (or rather, re-introducing them) because my roommate is a big collector. It amused me to take basic concepts of DC super-villains like Catwoman and Black Manta, then turn them into super-heroes. Frankly, I'm tempted to edit the Superhero article to eliminate all reference to Chicago Comics and replace them with yours. Zahir 06:34, 6 February 2006 (PST)

Maybe its because I just rented X-2 (in anticipation for X-3), I'm very willing to work with you on the idea of the Chicago Comics superheroes. One idea in particular I'd like to borrow both from the X-Men and the Wild Cards series is that there is some common source for a lot of the super-hero powers. For the former, a race of aliens came to earth millions of years ago and imbedded the potential for radical mutations in the nascent human race. In the latter, the cause was a mutating virus that killed nine out of ten of those infected, then deformed nine out of ten of the survivors, so than one percent of those infected became "Aces," i.e. super-powered. Let me know what you think! Zahir 22:41, 19 February 2006 (PST)

Sounds interesting. Lets go for it. (Although, I was going to reserch the X-men anyway for one of my own comic-series, the Alter-Gen. No doubt that they could be adapted as well.) --Sikulu 00:36, 20 February 2006 (PST)
Some of my own superheroes gain their powers from a mutagenic compound (not unlike the Big Bang from Static Shock). Perhaps something like that, or maybe a high-energy cosmic-ray event (not unlike what happened to the Fantastic Four). Let me know what you think. --Sikulu 00:54, 20 February 2006 (PST)

The Katangan goverment was modelled after the Cambrian one. Mugabe is a reference to Robert Mugabe. --Quentin 08:14, 8 February 2006 (PST)

Yes, I want to get more info on the NAL Provinces that don't have articles. Can you help me out? I also want an article to be available for each individual unincorporated territory. Also, are you any good at flags? I could do with a hand making a flag for Kent and Oxbridge. Thanks. --Quentin 07:27, 10 February 2006 (PST)

About redirects- someone ought to start using piped links or start sticking to spelling conventions if you want to get rid of Redirects then - there are loads of pointless red links everywhere!

If you would like to find me amerindian maps, that would be most useful. BoArthur

One question and one suggestion:

Q: Why are some of the countries shown all in the same grey (New Francy, Tejas, etc...) but other in different colours (NAL, Louisianna, Alyeska, etc... ) ?

S: The small part of MS on the mainland that nowaday is part of the province should be shown as "disputed territory" between NAL and NF until MS became a member of the former.

Thanks for the answer on my page. Since grey is a sign of being a colony, NF is probably a bit of a grey area itself (pun only half intended). Officialy, it was and is a province of the Kingdom France but since after 1792 the later does not exist, de facto it is an independent country. Not sure how that would fit with the colour scheme, maybe give NF a diferent shade of grey, make it polka dot grey/blue or simply make it coloured to show its de facto status. --Marc Pasquin 16:43, 8 January 2007 (PST)

Mariner's Pilot and Season Four's first episode actually were a two-part show; that's why we linked Season Four and Mariner 1 together. What were your thoughts? BoArthur 14:36, 23 February 2007 (PST)

Hey, Llywelyn, what do you think of the request of this gent: http://althistory.wikia.com/wiki/User:Villa_Cruoninga to be a sysop?