The Turkestani military have four basic types of uniform, which are worn in different circumstances by different members of the armed forces. The four types are:

In addition there is the special uniform worn by those of the rank of Tarxan (Field Marshall), which comes in Ceremonial and Full Dress variants.

The Ceremonial uniform is worn by Turkestan's ceremonial guards; those who perform guard duty at the Ilxan's palace, Ibrahım Enver Military Academy in Yası and other high-profile duties. It is a modern reproduction of an ancient warrior-champion's battle gear, complete with helmet, small breastplate, sword, shield and bow or spear.

Full Dress uniform is used on most formal occasions; it is a blended military variation of Turkestani folk costume, complete with çapan (long coat) and tübeteykä (small round hat also known in the various Turkic dialects as dopa and taqıa).

The tübeteykä is the standard military uniform headgear that is not a helmet. Particular ethnic regiments, however, often dispense with the tübeteykä, especially in winter, in favour of a more typical provincial hat. Qazaq regiments replace the tübeteykä with a tailed fox-fur hat called a tımaq, Türkümän regiments with the traditional Türkümän Telpek, and regiments from Kırğızstan wear their traditional qalpaq.

Below is the "standard" Full Dress uniform, with tübeteykä. Enlisted personnel lack the patterning on the lower sleeves and have their rank insignia worn on the shoulder. 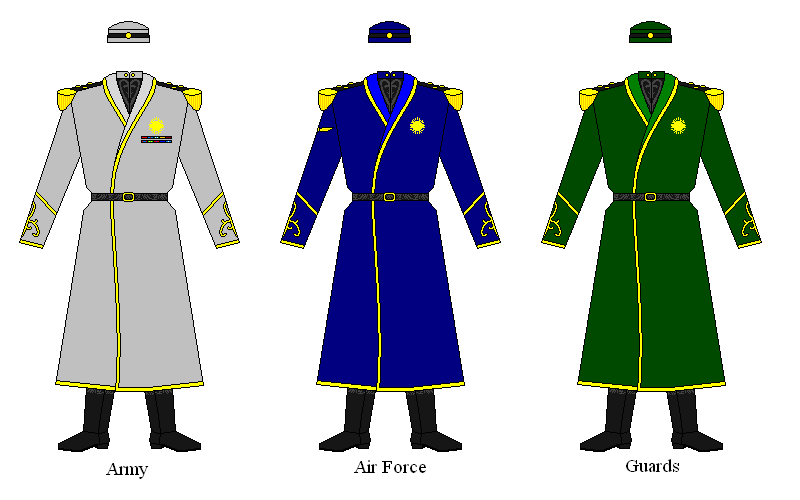 Battledress is a half-dress uniform which is worn as a standard uniform in a variety of contexts. It is similar to the Full Dress uniform, but is simpler, often with a shorter jacket replacing the long çapan. There is a lot more variation in Battledress between the three services, and there are different gradations of battledress worn in different contexts. More formal settings, for instance, require a çapan, whereas less formal, more workmanlike contexts would expect a short jacket. The Turkestani Military Uniform Code lays out rules for which occasions require what variation of uniform; the section on Battledress uniforms is particularly complex.

"Combat Uniform" is a term used by the Turkestani military to denote the actual fighting gear of the various services: camouflage fatigues for the Army, flight suit for the Air Force, both of these plus an informal battledress combination for the Guards, depending on whether they are serving in the ground, air or naval component of that force. It also includes things like cold-weather survival gear, SCUBA equipment and the like. 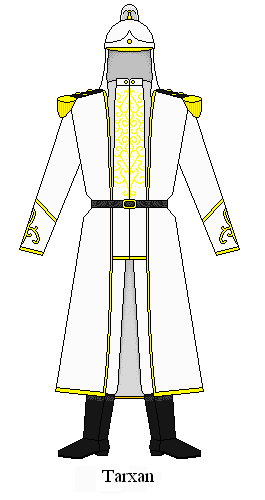 Those elevated to the rank of Tarxan (Field Marshall) are permitted to wear a special uniform in Full Dress and some Battledress contexts, which is the same regardless of the service they are serving with (see also here).