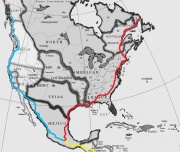 The Transcontinental Highway, marked "TCH" on highway signage, is a major international highway in North America, stretching from Central America in the south all the way up into Oregon in the northwest and New_Francy and the NAL-SLC in the northeast. Ciudad de Mejico is the central hub where all the branches of the TCH meet. There is undoubtedly some sort of monument on prominent display in the plaza where the roads meet. A map of the TCH system resides in the Atlas.

In 1925, the Trans-Continental Highway Congress met in Buenos Aires to discuss the planning and construction of a highway system that would connect the two continents of the western hemisphere. Construction began only in the 1950s, connecting the various highway systems of the participating countries, and the North American portion was completed in 1977 with a grand exposition in Ciudad de Mejico, attended by the crowned heads of the Americas. The South American portion of the highway remains incomplete, due to political mismanagement and the existence of a nature reserve in Nova Granada.

A proposed Green Route would head down the east coast of South America through Venezola, English Guyana, Cambrian Guyana and Brasil. Another proposed route would begin in New Iceland and come down through Louisianne to meet the Red Route at Nouvelle Orleans. Another proposal calls for a route to connect Mueva Sefarad with Alyaska and to extend the Blue Route into Alyaska. Oregonian politics has thus far thwarted construction, though Alyaska has planned and graded its portions of the route. The other proposals generally amount to wishful thinking on the part of local politicians and generally involve nothing more that tacking up TCH placquards all over already existing roads, something which the TCHC has thus far been leary of. That said, the tiny Principality of Watlings Pond, UT out at the end of PR-91 is 100% prepared for the TCH and has prominently displayed at one edge of town an official highway sign that reads "S TO TCH via WINNIPEG - 2100mi", while at the other the sign reads "W TO TCH via NEW ARCHANGEL - 460mi". The town's tourist attraction, the Transcontinental Lorry Park and Arcade-o-Drome, owned by the Grand Maharaja John "Vinay" Watling, Prince of Watlings Pond, is not to be missed. In 2007, the Maharaj incorporated 8888 miniature holi lights, outlining the huge mural of Swami Prabhupada that tops the Arcade-o-Drome, thus ensuring that his establishment can not indeed be missed.

The TCH passes through the following principal cities:

An early Texan proposal called for the route to pass along a more northerly route, directly into Alta-California rather than into Mejico:

Since the wars between Alta-California and Tejas, there have been no surviving highways in that part of Tejas anymore. They were destroyed during the wars, and have not been rebuilt. There is not a single highway bridge left standing west of the Rio Grande, and few cities either. War is never kind. Even though the region is being rebuilt, it is most unlikely that such highways as Tejas constucts would become part of the TCH. This route was seen by some as mere Tejan aggrandisement as the additional alignment would serve no efficient purpose.