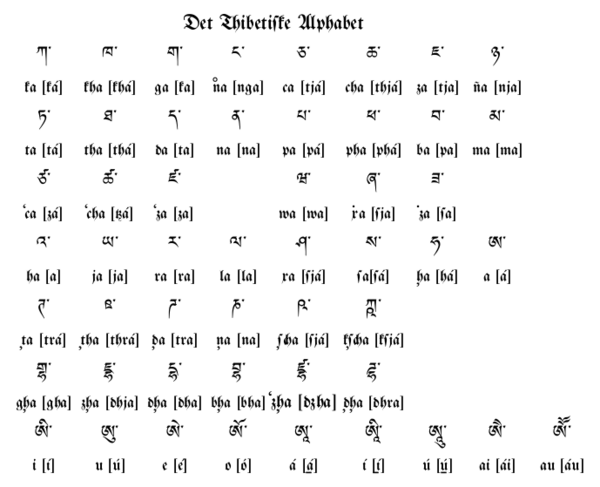 Due to the great gap between written and spoken Tibetan it is in general not only necessary to transliterate Tibetan, but also to transcribe it in order to indicate the correct pronunciation.

In general each foreign language uses its own system for transcribing the pronunciation of spoken Tibetan, but the one preferred by most Tibetans is the one devised in the 1860's by the Scandinavian missionary Thorvald Jacobsen Rømmestad (Tibetan ཐུར་དྦལ་ཡ་ཀོ་པ་ Thur-dbal-Ja-ko-pa [Thúrwǽl Jakóba]) based on Norwegian and Danish letter values and originally printed in Fraktur.

In the following all examples will be shown both in Xrírámpur romanization, which reflects Tibetan spelling and in Rømmestad transcription which reflects pronunciation.

The relation between complex spellings and pronunciation

The main source of complication is the fact that in the dialects of central Tibet, among them that of Hlása, ancient consonant clusters and syllable-final consonants have become reduced. As a result of this most single consonants of the language can be spelled in several ways, often with clusters of conjoined consonant letters where only one consonant is pronounced. Some of these conjunct spellings are equivalent to single-consonant spellings corresponding to one of the letters of the conjunct, but in other cases the lost consonants have affected the pronunciation of the preserved consonant, so that many conjunct spellings correspond to distinct sounds of the language which cannot be written with a single consonant letter, but only with various conjuncts; this is particularly the case with voiced stops and affricates which are all written with conjuncts.

It should be noted that the letter z has very different meanings in the Zrírámpur romanization and Rømmestad transcription. In the Zrírámpur system the unadorned z corresponds to alveopalatal affricates and the z̒ with a superscript inverted comma corresponds to dental affricates. In Rømmestad's system the unadorned [z] on its own indicates an unaspirated voiceless dental affricate, while the digraphs [tz] and [dz] stand for an aspirated voiceless dental affricate and a voiced dental affricate respectively. Rømmestad avoided the according to him 'uncouth' digraph [zh] in favor of a distinction between the to him familiar [z] and [tz], common in German and in Scandinavian family names where they both corresponded to the same unaspirated or weakly aspirated alveolar affricate. The rare z̒h̦ corresponding to Sanskrit zh he was forced to render by [dzh], but it hardly ever occurred in the Christian texts which he wrote and translated. Despite its illogic this way of transcribing the dental affricates has remained in use.

It should also be noted that the sounds stranscribed as digraphs with a following -j, -r or -z are all perceived as single sounds by Tibetan speakers, as are the aspirated sounds written as digraphs with -h or h-. The digraphs are partly derived from Tibetan spelling, since the modern simple sounds like [c cʰ ɟ ɲ ʈ ʈʰ ɖ] go back to ancient clusters or where written as such kj khj gj ñ mj kr pr khr phr gr br in the Sanskrit-derived script. The alveopalatal sounds c ch z ñ x [tj thj dj nj sj] in fact go back to clusters or palatalized dental stops in pre-Tibetan, but are all written with single letters which were used for alveopalatal sounds in Sanskrit. Rømmestad's transcription with [tj thj dj nj sj] is due to his native Norwegian pronunciation of such spellings in Danish and Riksmål, which in turn is due to a historical phonology parallel to that of Tibetan! The spellings are unambiguous in Tibetan and have therefore remained in use among Christian Tibetans and when Buddhist Tibetans transcribe their language into Roman letters.

In a few cases the pronunciation of a conjunct is further removed from the ancient cluster represented by the spelling, as with zl which is pronounced [da] or dba, dbja and dbra which are pronounced [wá já rá]

Lost ancient consonants have also in many cases affected the tone of the syllable. In particular former clusters involving nasals and semivowels have resulted in high-tone syllables, while syllables written with a single nasal or semivowel letter are pronounced with a low tone.

In the pronunciation of some Tibetans the unconjoined grade three letters ga za da ba z̒a are pronounced as low-tone syllables with aspirated voiceless stops or affricates, and the same letters with the superscripts or prefixes r-, l-, s-, g-, d- and b- are pronounced as low-tone syllables with unaspirated voiceless stops or affricates, and only grade three letters with prefixed h or m are pronounced as low-tone syllables with voiced stops or affricates. This pronunciation is fully valid and is even regarded by some with a degree of prestige, and it is entirely possible to represent this pronunciation in Rømmestad transcription, although usually the more common pronunciation with unaspirated grade three sounds and all conjuncts corresponding to voiced sounds is followed in transcriptions.