The islands, as an English colony, would have the usual red cross patern with CoA inside a circle. 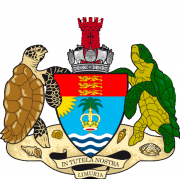 I made that same question here some years ago thinking it should be the Solomon Islands in the Soputh Pacific. :) See: http://en.wikipedia.org/wiki/Salomon_Islands

Indeed! The Salomons are an Indian Ocean territory, and are British. Well, carry on then old chap! Elemtilas 02:58, 26 November 2010 (UTC)

I'd suggest a single lion in the chief, rather than all three. (See the arms of Fiji, New Brunswick, Cayman Islands, and Prince Edward Island *here*.) Benkarnell 12:47, 3 November 2011 (PDT)

When I made this CoA almost a year ago I based it in the *Here's* BIOT CoA. The three lions are derivate of the same number of lions at *there's* English flag, replacing the Union Jack placed in the chief from BIOT's CoA.--Pedromoderno 07:15, 4 November 2011 (PDT)

Yes, I just think the three are a little awkward squeezed in there, and leave a lot of blank space on the sides. *Here* many countries/provinces with English ties use the single gold lion in chief, which fills the space better. Benkarnell 07:26, 4 November 2011 (PDT)