At present it IS working in progress. I started this page and got a bit distracted, but I intend to finish it soon. The idea of this page was to have one place where we have all snorist flags together (without making a new category, which IMO wouldn't be warranted). I'm thinking of restructuring it a bit before I complete it. —IJzeren Jan Uszkiełtu? 20:10, 29 July 2008 (UTC)

I thought that the logo was rejected because the trident would be too Ukraine-nationalist.--Marc Pasquin 15:50, 30 July 2008 (UTC)

Yep, that's right, I added it without looking closelier! In any case, I don't think this symbol is completely wrong anyway. I'm having a few second thoughts regarding the story of Malorussia/Ukraine, you know. Somehow, I don't really buy my own story of Ukraine, an at least semi-sovereign state, completely pushing aside its own culture and language on behalf of a foreign (Russian) one. Unlike *here*, Ukraine had been independent for over twenty years, something that cannot easily be neglected. I'm sure the SLAB/SLOB was one of the most radical snorist parties, and I'm quite sure it took care of the Big Renaming Operation turning Ukraine into Malorussia and supplanting the Ukrainian language with Russian. But, as you can see in the article Ukraine, in the 1960s a moderate re-Ukrainisation took place. I'm seriously wondering if this couldn't have been a good moment for a return to Ukraine as the name of the country and Ukrainian as a state language, at least officially. Russification may of course continue, but even *here*, the UkrSSR was at least officially a Ukrainian state. Anyway, at this point the SLAB might have renamed itself SLOB and the Eagle and the Tryzub may have merged into the logo we're talking about here. Thoughts? —IJzeren Jan Uszkiełtu? 18:07, 30 July 2008 (UTC)

Could be. Slob would be more ukrainian in appearance while remaining a puppet of russia ? --Marc Pasquin 15:54, 11 September 2008 (UTC)

In the article both Bulgaria and Azerbaijan appear with same flag. Surely this must be a mistake. As about Bulgaria I always liked much that flag and preferred it to the one as it appears in the FOIB web-site.

Perhaps. There are a lot of dragons here - we basically don't know anything about Azerbaijan in IB, except that it was a snorist state after GW2. As far as I am concerned, we don't even know if they are Zoroastrians or Muslems. —IJzeren Jan Uszkiełtu? 11:24, 31 July 2008 (UTC)

Azerbaijan as a Zoroatrian country seems an interesting idea. I just mentioned Azerbaijan as a Muslim country due to the flag which appears in its article. --Pedromoderno 00:41, 1 August 2008 (UTC)

Funny when I was learning about Buddhism for Greco Buddhism, wikipedia had an area that was in Azerbaijan and I think Georgia too as Tibetan Buddhist. How did that happen? Misterxeight 00:44, 1 August 2008 (UTC)

Just some thoughts. I always noticed that the flag of the State of Hungary has an eagle much similar to the Russian SNOR and to snorist Belarus. As both Russia and Belarus are Slav countries, definetely quite close to each other, their eagles could be very similar.

I'm wondering, shouldn't Hungary have its own snorist symbology? As Hungary isn't a slav country. For compairasion, former communist countries *here* had some common symbology (the hammer & sickle, the five pointed star and red flags, for example) but all also had distinctive COAs (or perhaps should be called emblems) with local symbology. As for fascist countries *here*, which are real world counterpart to snorism, had their own symbology which was different from country to country. Fascist symbols of Nazi Germany were different from what was used in Hungary at same time, for example. But when I see both they are different but still have a style which I identify with fascism.

Perhaps snorist COA from Hungary could have a national animal (which one is the national animal of Hungary?) and surely could keep its cross, perhaps with extremities styled as arrows or just keeping the cross the way it appears in hungarian present-day COA (both *here* and *there*).--Pedromoderno 23:23, 11 September 2008 (UTC)

Among the several snorist flags Belarus has my favourite. But always seemed to me something was not right: its logo seems to me too russian (double head eagle and a cross too similar to Snorist Russian flag). Also yellow cross over white doesn't seem to work much.

Although Belarus being so culturally and ethnically close to Russia I think it should have its own cross and strong animal. In my opinion a bison would be the right choice (already used in local *here's* nationalist parties as I could find in FOTW web-site) and *here's* belarussian COA can give us clues about how the cross could be.

Below my sugestion. What do you guys think? 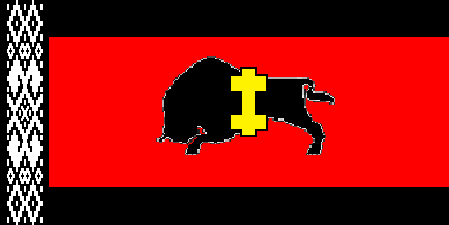 It's a nice concept, but like Zahir said, the wisent could be a little more distinct. I was going to add that IIRC wasn't Belarussia run basically as an integral part of Russia, but a quick shufty at the relevant article seems to suggest that was Ukraine. If that thad been the case, the Russian eagle would have made more sense. But even Ukraine/"Malorussia" has its own symbol (which is one of my favourite snorist emblems!), so yeah, maybe we could go with the wisent. - Geoff 13:13, 27 March 2010 (UTC)

My proposal for Snorist Belarus flags, choose one, any color schema and size variations are available ;-) Follow by white rabbit 17:08, 30 March 2010 (UTC)

I think I like nos. 4 and 2 the best. ISTR (and a quickie search confirms) that the decoration is some kind of traditional weaving and the colours have symbolic meanings. *Here*, it's red designs on white (see Wikipedia:Rushnik). Maybe the decorative strips should be red and white, though that would unbalance the flag colours and you'd have to completely rework it. Hmmm, I'll see what I can come up with. - Geoff 10:34, 31 March 2010 (UTC)

I’m afraid, that above wisent symbol can’t be used, because it’s copyrighted – it’s a logo of a Polish bank, Pekao S.A.. IIRC, the flag of Kemr had to be changed because of breach of copyright, so maybe it’s better not to use a copyrighted material again. Maybe this proposal would be better:
http://img543.imageshack.us/img543/9301/snorarusl.png
The wisent symbol in my proposal was taken from here: [1] and it’s public domain (well, technically “not subject to copyrights”). Paweł Ciupak 12:20, 3 April 2010 (UTC)

It shouldn't be too hard to make a similar design but make it your own - it looks to me to be a simple outline with really thick lines. BoArthur 21:14, 5 April 2010 (UTC)

To be honest muntenian snorist flag and emblem never convinced me. I never liked its eagle. Below just ideas for a better snorist flag and emblem, in my opinion. I first tried to do something based on *here's* Moldovan CoA (as *there's* Moldovan one is different), which seems to me crying Snorism or Fascism. Unfortunately I wasn't able to adapt it to Muntenia. So I used the Muntenian golden aquila which appears on *here's* Romanian CoA (on top left quarter). What do you guys think? 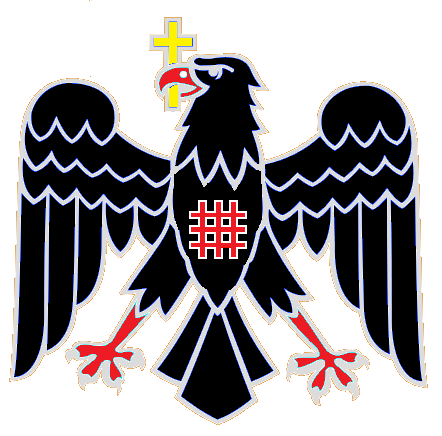 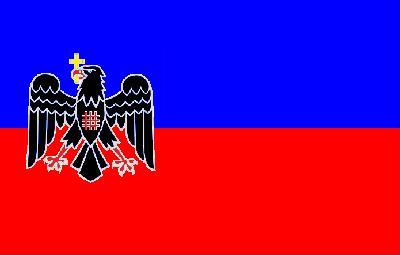 Also found this for Crimea:

From what I understand, the main reason why most SNORist nations are SNORist is because they got invaded by Russia during GWII. If so, then how did Azerbaijan and Georgia become SNORist, if they did? Has that been well worked out? Juan Martin Velez Linares 23:05, 1 September 2015 (CDT)

I read that Croatia during GW2 was invaded by the SNORist puppet state of Russia and Serbia so they might have established a SNORist state using Ustasha collaborators. A split between the Ustasha movement occured: Nicola Mandiť, the Prime Minister, surrendered to Serbia and converted the Ustasha supporters loyal to him into the Nacionale Bratstvo Pokret, and was opposed by both the Ustasha remnants and the Partisans of Broz. The main difference of the Ustasha and the NBP is that the Ustasha were tolerant of the Muslim population as long as they are loyal to Croatia and become Croatian citizens, while the NBP persecuted the Muslims for being "agents of the Ottoman Turks". Also, the NBP accepted that the Croats are Slavic and they stopped the persecution of Serbs. Otherwise, the NBP and the Ustasha were very similarly organized; indeed, Mandiť also used the title Poglavnik and retained the name Independent State of Croatia. The NBP collapsed after the war, and attempts to resurrect the movement in the former CSDS were squashed by the neo-Ustasha regime.

Here is a possible logo:

It may be possible if the Croatian Trefoil be substituted with the NDH logo.

To my knowledge, no SNORist regime was ever established in Croatia. IIRC it was the Ustasha vs. the partisans. I'm going to have to say this wouldn't fly under QSS. Dalmatinac, Ferko and Jan should be able to elaborate. Juanmartinvelezlinares 16:35, 13 January 2017 (EST)

Could a simplified version of this lion, made different enough from a bank be the Georgian SNORist logo? 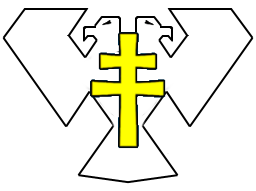 Does it look good?

looks good but I think way back when, either Jan or however was developing Belarus decided it copied the Russian SNORist emblem based on the flag. Could work as a variant related to Moldova. --Marc pasquin 08:05, 30 September 2020 (PDT)

What about a symbol based on this?