One question for now: given our current and ongoing discussion about our little happy language family, shouldn't it be Sútý Hlurán instead? --IJzeren Jan 02:04, 27 October 2005 (PDT)

Och, that shouldn't be much of the problem, methinks. But about that other thing: of course CT > c, but as far as I know, NCT > NT much earlier in Vulgar Latin and everywhere in Romance. In Wenedyk I have sąty, in any case. --IJzeren Jan 12:45, 2 November 2005 (PST) 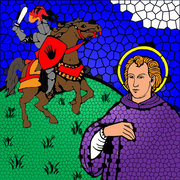 Kinda slapped together but can perhaps be one of several depictions

Attributes and manner of death

Tell me where he was martyred (in the city, in the country, by a cave, on a hill, etc) and in what manner (stoned, shot through with arrows, hanged, crucified, butchered, etc). What is Glorian renown for (apart from being one of the holy martyrs)? -- what theological or Christological point does he represent (if any -- was he known for feeding the hungry or giving to the poor or defeating the Darkness of Paganism)? What are his attributes? If he was a Dux, was he a warrior that was converted to Christianity (like St. Martin) or was he known for his defense of the faith of the True Cross? Or, was he a teacher and scholar, a theologian? Will also help to know if Slevania is Orthodox or Catholic. [PB]

I don't know very much apart from his being a Dux and a defender of the faith. Glorian's own doctrinal position is a bit hazy, since he lived in the Dark Ages and Slevania had been cut off from direct contact with Rome as well as Byzantium for centuries due to the successive invasions of Pannonia by diverse barbarian peoples from the east, but those who venerate him now are certainly Catholics. He was not a convert, but rather the last of a line of Christian Duces of unknown length, but theoretically going back to Roman times. As for the manner of his death he was probably struck down by spears on the battlefield. It is not known what nationallity his slayers were, but they were probably pagan Avars, Slavs or Hungarians and not fellow Slevans/Romans (there probably were nopagan Slevans in his time.) -- BPJ 08:17, 28 October 2005 (PDT)

Zahir: no proposal template is needed, since I'm praefectus of Slevania, as long nothing I write about Slevania conflicts with someone else's work! BPJ 11:38, 2 November 2005 (PST)

I thought as much but didn't want to take the responsibility without being certain. Zahir 11:47, 2 November 2005 (PST)