What war between Lithuania and England in past two years? Wouldn't it be the war between RTC and England then (as I guess RTC has a common foreign policy)? Abdul-aziz 17:38, 18 February 2006 (PST)

I should hope not. Given Kemr's propensity for sane colonial policies and building solid relationships with post-colonial countries (take for example, Ireland), I would suspect that Rhodesia was up and comming until CEA invaded. We don't know how badly Rhodesia was damaged or how much was gobbled up by CEA (could be only portions were -- there are just no details), but it appears that things weren't so bad as the reinstated government seems to have things under control. The nature of the Commonwealth is also such that member states are more closely aligned and take responsibility for each other. All for one and one for all sort of thing. Elemtilas 21:12, 4 February 2007 (PST)

I get the impression that it's something like how in the US, you have state militias (granted, in modern times they play a much less important role than they once did) as well as a federal military. My understanding is that the FK has an army for each of the member kingdoms, as well as a FK-wide military. Nik 14:27, 7 February 2007 (PST)

I get the feeling that it was a primarily kemrese manoever and that some of the FK blokes came along to help. BoArthur 15:51, 7 February 2007 (PST) 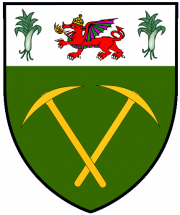 This article is looking great so far, but I see a conflict. This article says that the CEA invades the region in the late 1980's, but the CEA as a political entity has almost completely dissolved by this point; it only consists of what is now called of the Federation of Kenya. However, I like the idea of an East African coalition attempting to invade Mutapa, so I propose a slight modification. I propose that, shortly after Tanganyika becomes independent in 1984, the nations of Tanganyika, Malawi, and Msumbiji form a temporary coalition to invade the region either out of Pan-African irredentism or maybe because the independent states are actually controlled by Chinese warlords. In either case, the coalition is defeated and disbanded by the 1990's and not reformed until 2000 with the East Africa Treaty Organization. Perhaps, if the war was caused by Chinese warlords, this fact could cause or explain extended persecution of Chinese minorities in southern East Africa and why most Chinese in the region live in Zanzibar. What do you think? --Gwaell 20:27, 1 April 2021 (PDT)