I hope I haven't offended anyone by "taking over" the Lusoamerican Union, at least insofar as it needed a history and some images. Some work has been done on the LAU members in the article on South America as well. Kyrmse 14:03, 14 Jul 2005 (PDT)

As a reminder to myself (and to anyone who wishes to know more about the exact boundaries of the ULA), I have uploaded this sketch map showing (in grey) the boundaries of *here*'s Brasilian states (and Federal District) and of Uruguay. Superimposed on that are the states of IB's Equador, Bahia, Brasil and Paraná - labelled in different colours - as well as IB Uruguay. Kyrmse 10:11, 9 December 2005 (PST) 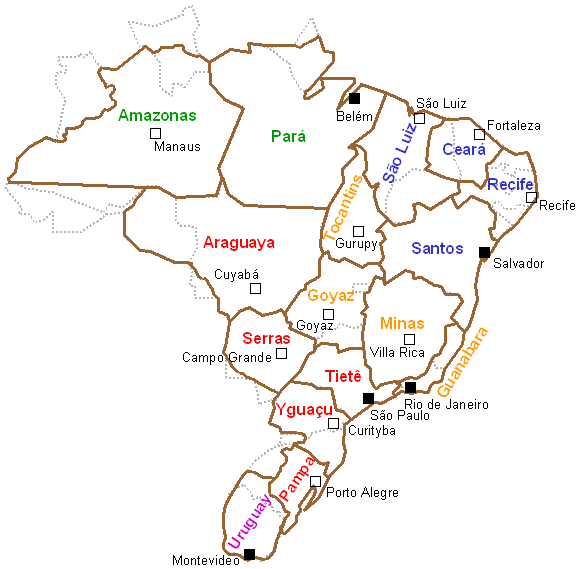 The main reason that Brazil never separated *here* is that Portugal kept Brazil as only one colony. --Sikulu 16 December 2005, 16:08 (GMT)

Yes, but in IB the several (groups of) capitanias hereditárias (hereditary captainships) - the forerunners of most of today's coastal states - decided to take their own ways, due to regional differences in basic culture and outlook. These differences still persist today *here* - and even more so *there*, as the four countries that used to be the Portuguese colony of Brasil (BA, BR, EQ, PA) grew more apart than would have been the case had they stayed together (maybe even becoming an empire [What an outlandish idea! Good for some alternative timeline, if someone decides to write it up(#)...]).

(#) Maybe the Portuguese king sails back to Portugal after the Napoleonic danger is over (thus setting the stage for an epic movie, The King's Return), and his son takes over as Brasilian Emperor! ;-)