I was going through articles on the HRE and discovered this one refers to three English Kings also being Electors of Hannover. I'm presuming this is no longer accurate? Zahir 12:19, 26 November 2005 (PST)

I couldn't tell you for sure. I made these articles about 18 months ago as I was trying to do my Atlas project. I would ask in Lla Dafern to be sure of the concensus on the matter. BoArthur

(something) our free hearts? Benkarnell

My Germanic understanding (thanks to Swedish, German and English) says it's "With Our Free/Willing/Open Hearts" (the different options represent the different feels that I get from the word in German/Swedish. BoArthur 20:14, 25 September 2008 (UTC)

Hoi! No, Daitsch isn't that crazy little conlang I was talking about. I've decided I need to create a firmer base in Hanover before I can work out exactly where it fits. Daitsch is, sort of, my own work. a relative of Kölsch/Luxembourgisch that I feel would be more or less 'native' to the area. And also purely because I love the Moselle Franconian tongues. Anyone have any input on the above? Would really like to hear other peoples opinions on Hanover's progress, as small as it is so far lol
P.s How do I get to these Talk pages? I only found this discussion because I look at the Recent Pages link.
p.p.s Yes, it translates to "with our free hearts" in Daitsch. Geofturner 26 Sep08 11:30am (AEST)

As far as I'm concerned, a conlang's a conlang, even if it is more of a "con-dialect". I know that I've never tried to do either and am daunted by the very idea.
PS: Assuming the site looks to you like it does to me, there is a tab that says "discussion" at the top of the page right next to "edit". That takes you to the talk page. Benkarnell 01:57, 26 September 2008 (UTC)

Does anyone have any views regarding how Hannover operates within HRE, and Europe? People must have some preconceived ideas about it, and I wanna hear 'em :)

I've come from a quite a liberal family who've always voted for the more leftwing party/s, and I was sorta of thinking that maybe I could meld Hannover into a similar of the Nederlands *here*. Drug laws, Social norms, GLBT rights, abortion etc Any things you guys would love to become a part of Hannover? Geofturner 4.00pm 30September 08 (AEST)

I for one think this an interesting idea! One wonders how a monarchy would go with something like this, and a weird idea pops into my head--what if some monarch decided to start handing out noble titles wholesale, greatly increasing the number of "nobles"--in the name of democracy! A weird idea of doubtful practicality, but stranger things have happened... Zahir 17:47, 30 September 2008 (UTC)

Well, Netherlands *here* is a monarchy. Nothing unheard-of about a liberal monarchy. [EDIT] Although, Henua became a democracy by almost that same process - a national literacy program elevated everybody to the rank of tuhuña. Benkarnell

Good point about the Netherlands. I suppose I was thinking about a German Monarchy. Ever see Blackadder III? The one where Blackadder is trying to find a rich wife for the Prince of Wales and notes one of the candidates was voted "Worse Personality In Germany--and as you can imagine, she had some pretty stiff competition!" But enough of such ethnic slurs. For now. Probably anyway. <g> Zahir 21:00, 30 September 2008 (UTC) 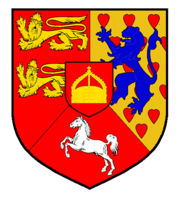 Royal Hannover Arms *here, sans the UK arms
I tried to reproduce the Royal Hannoveran Arms from our own history. Please let me know if you want to keep it, or would prefer something else. As you can probably tell, I enjoy doing stuff like this. <g> Zahir 00:56, 8 October 2008 (UTC)

Wow! That's amazing!!! it looks incredible! thanks so much! will most definitely be used! Geofturner 17:30 8th Oct 08 (AEST)

greetings geof, have you any reasons for appearance of bohemian in wendland? bohemian language it-self was constituted 200 years after the bohemia has lost its fingers in the region (when brandenburg was handed over by sigismund of luxembourg to hohenzollerns) and the language became official in early XIXth century. the same goes for polabian, a conservative estimate in accordnace to QSS (see Polabian) says, it is hardly possible for it to survive till XXIst century in such huge extent. well, no offence, but i would hardly agree with the figure on languages given in the article on hannover until you come with good arguments ;) Jan II. 09:13, 12 November 2008 (UTC)

well considering this Polabian (pülobsťe rec) is a Slavic Language of Lekhitic group, spoken by approx. 80.000 inhabitants in Mecklenburg, mostly between and around towns Nyenbramborg and Nyenstrelitz. i don't think they immediately stop speaking it at the border.
and there'd be some immigrants of Bohemian decent in this district. Geofturner 22:20 12 Nov 08 (AEDST)

well, the polabian speaking region is far away (few hundred miles) from borders of mecklenburg and hannover, check the maps ;) so, i presume, the polabian in hannover would have negligible number of speakers (as it has already low numbers in meckleburg it-self). as for the bohemians, just out of curiosity, what do you think would be the reasons for them to migrate there? and how much did went there to form mentionable minority? do they settle more or less homogeneously some region? until yet, i have rather thought bohemians *there* are far more conservative than czechs *here*, have better economic situation throughout the history, so less pushes to emigrate. that's why i do not suppose any important minorities of bohemians in e.g. america comparing to almost two millions of czechs *here*. i am really just only curious what were your thoughts on this topic. Jan II. 14:00, 12 November 2008 (UTC)

Yes I've seen the map mate, I made the Mecklenburg one. and I don't suppose they're exclusively in Mecklenburg though. maybe i just assume that the speakers are more spread out then the author of Mecklenburg/Polabian intended. i'm still rather new to IB and thus many things regarding Hannover have not yet been decided, thus a lack of information regarding the population of Bohemian speakers in the Wendland. so just gimme some time and i'll have a bit more of an idea. Geofturner 12:00 13th Nov 08 (AEDST)

the poor me is the guy who introduced polabian and bohemians into IB world ;) so, that's why i am so nitpicking. i welcome any interesting new ideas, but yes, i would like them to be consistent with what was already done. so, feel free to ask me whatever you want to know and you haven't find on-line. i hope i do not sound rude, that is not the intention. Jan II. 07:03, 13 November 2008 (UTC)

as i said above, i just have a lack of evidence to support my proposal. it's not such a far fetched idea though. stranger things have happened in our world Geofturner 15:13 14th Nov 08

well, that is pretty true, stranger things happens, but this is a constructed world and i would like to have it coherent. so, until you come with explanations, i would retract the polabian population from hannover, they could hardly be there under current assumptions (QAA principle). no offence, i am just worry about the consequences, which such small deviation may cause, if they would appear en mass in our constructions. they turn IB metastable. this is why QSS and QAA do exist here. so, i kindly ask you to come with good hypothesis or change the current descriptions. thanks, Jan II. 07:41, 5 December 2008 (UTC)
Sounds like Jan II has a point -- although I would say that if you do find a plausible reason, and Jan II goes along with it, then it could be restored. BoArthur 17:47, 5 December 2008 (UTC)

done. however i still don't quite see how saying that there's a small population of polabian speakers living in hannover completely negates all your work. is it not natural that people move around, and often congregate in certain places. may i ask what is this forseen turmoil that has got you so worried? Geofturner 16:50 8th Dec 08 AEDST

ok, i'll try to put here all my arguments: polabians are already minority in their homeland, pro primo. there are only few of them either. pro secundo, seeing how other (slavic) minorities naturally behave, especially on territory of germany *here*, these historical events, which preserved them *there* does not seem to allow them to survive elsewhere as distinct minority. see sorbians, once they move out of lusatia, they stop to be sorbians, they became germanised very quickly. in lusatia, they survive, elsewhere not. pro tertio, you do not "completely negate" my work, you rather input unnecessities. if not applying ockham's razor, IB may be full of such things, which *might* to negate *our* work ;) any construction is based on coherency, which must be mas o menos strictly fulfilled. if you come with something not yet described, it must be in accordance with things already described, not only factually, but also principally. when i came with idea of nassians, i had to discuss many many things with kristian and jussi to get them *there* (and they refused many of my ideas because they did not fit IB reality), because of the same reasons as i today discuss with you the polabians in hannover. do not understand me wrong, i am not headlessly trying to kick your ideas off. i acknowledge your fine work on hannover, e.g., but try to understand my concerns. QSS and QAA principles say, these concerns are general. Jan II. 07:20, 8 December 2008 (UTC)

Okay, here is a relavent passage from the article: The Duke of Calenberg moved his residence to Hannover in 1636, and his lineage thus became the Duchy of Hannover which had royal ties to England. One of his granddaughters married James IV of England and Scotland, his descendants later ruling that nation. That particular Duke in *our* history was Georg[1] of the House of Hannover. Now, we know this family did not in fact become the royal house of England in IB, but here is a breakdown of the members from Georg onward, with some notes:

Something to build upon, maybe. Another possibility is that Charlotte had a child, or that Charlotte was in fact Carl. For your consideration... Zahir 17:36, 25 December 2008 (UTC)

In my opinion, there is now so much detail that Hannover deserves its own category, presumably as a subcategory of the Holy Roman Empire. Zahir 15:26, 18 February 2009 (UTC)

Can anyone make one? I'm still such a novice when it comes to HTML and stuff like that lol! P.s thanks for updating the Royal house of hannover page Zahir! Geofism 9:15 19th Feb 09 AEDST