Is it thinkable that the first king of Estonia (in 1918) was Adolf Friedrich von Mecklenburg-Schwerin? *Here* he was the projected monarch of the "United Baltic Duchy" Germany had in mind after the Peace of Brest-Litovsk, but this never happened because Germany lost the war in the west. My guess is that *there* he might have endured. In that case, king Lembit would be his offspring. Kristian? Dan? Others?
Cheers, IJzeren Jan 03:44, 18 Feb 2005 (PST)

This was before all the chaos that took place in Mecklenburg during GWII when the duke of Mecklenburg-Schwerin and his family were liquidated by the Hessler regime. So I think its possible. Boreanesia 04:27, 18 Feb 2005 (PST)

Remembering of course that not all of Mecklenburg-Schwerin were liquidated, as the SR Queen and Duchess of Schleswig-Holstein survived the Hesslerian purge.
How would that affect things in GWII? BoArthur

I can't really tell, because I don't know what the family looked like. Have we ever mentioned the name of the duke who was killed by Hessler? IJzeren Jan 00:43, 19 Feb 2005 (PST)

The one that I had planned on/expected was indeed, Adolf Friedrich VI, father to Alexandrine "Adini", the wife of Christian X and his son, Alexandrine's brother. I had been under the impression there were only 2 children in the family. I could be wrong. BoArthur 17:13, 22 November 2005 (PST) 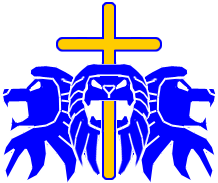 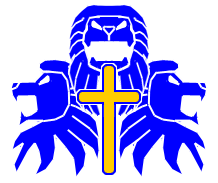 Excellent. I prefer the second version (in the first, it looks a bit like the poor animal has been stabbed with a cross).

I've been thinking about how this could look on a flag. All in all, if we want to keep the lions on a white background, I can think of two alternatives: [...]

Personally, I think I prefer the second version. But perhaps you have a different opinion? Or, if we should go for the blue-black-white flag after all, would it be possible for you to place the lions against a black background instead of a while? --IJzeren Jan 12:39, 23 November 2005 (PST)

Definitely #2! I think it has all the qualities we need: basically the same flag as the pre-GW2 and post-snorist flag, but nicely transformed into something with a distinctly totalitarian look. Very nice, really. The other ones aren't bad either, but somehow the oval reminds me more of a corporate logo. Thanks! --IJzeren Jan 00:29, 24 November 2005 (PST)

Here is a reupload of your proposal in the .PNG image format. Does this look correct?