Grazi. That's very useful. My goal this weekend is to finish all of the other provincial descriptions, then start working on flags for them. Sectori 19:27, 12 April 2007 (PDT)

...while I'm certain I'll need to do more on this, especially the economy and government sections, I think this article's ready for proposaling. Critique as you well. I'm especially interested to see what people think of the religion section. Sectori 19:05, 1 September 2007 (PDT)

This may not be the place to discuss this, but why are there two different lists of Italian states? Benkarnell 14:29, 8 July 2008 (UTC)

Because Originally there was the Lombard Republic, the Rep of 2 Sicilies and the Papal States. Then DeCameron came, made sweeping changes to northern italy, and then disappeared without a trace about 3 months later. BoArthur 14:50, 8 July 2008 (UTC)

So are both lists "real"? They actually seem to cover different places. The other one (the one that excludes Aosta) seems to consist mostly of very tiny duchies. Benkarnell 15:01, 8 July 2008 (UTC)

There was some conversation back and forth about it. I think that we were looking more toward the one that _doesn't_ have the bjillions of tiny duchies (that was DeCameron's). IIRC. I'd double check with Jan/Padraic. BoArthur 16:17, 8 July 2008 (UTC)

Addenda: Sectori started the re-work of DeCameron's efforts, but he, too has gone quiet. The same list is the better one, however. BoArthur 16:20, 8 July 2008 (UTC)

Huh. I kind of like the little duchies. (I realize that I have a vested interest in that sort of thing.) Most, but not all, seem to have some historical basis. Benkarnell 12:54, 17 July 2008 (UTC)

They did/do. He poked his head in here the other day; you might leave him a message about it all. He and Sectori both got half-way through their revamps and let it drop, for whatever reason. BoArthur 15:23, 17 July 2008 (UTC) 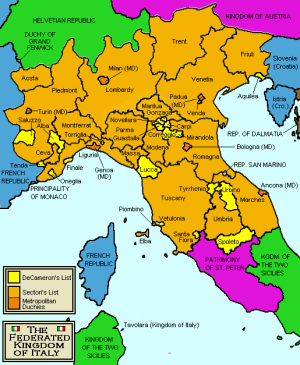 Well, I actually made this map back in July, when we had this conversation. It seemed imprudent for me to butt in with it at the time, but things have been sorta quiet lately, and there's no reason to just let it go to waste. Orange states are the accepted states Sectori has listed or worked on. Yellow states are ones made by Decameron that are currently in limbo. They have flags in Concultures file folder, and he seems to have begun creating monarchs and stats for them in alphabetical order, giving up partway through. The only one that was "saved" seems to be Ceva, presumably because the Queen comes from there.

As far as size goes, most of the yellow bits may be much smaller than I drew them. Most are historical mini-states of Italy, but a couple eluded me and I just put them wherever the town with the corresponding name seemed to be. This led to some odd states: Torriglia seems to be a suburb of Genoa, Venda a suburb of Padua, and the only "Santa Flora" I could find was this monastery in Tuscany. The other states that bear mention are Tyrrhenia and Tavolara. Tyrrhenia sounds like a French Revolution-era republic, many of which (Batavia, Helvetia, even an "Eturia" in Tuscany) substituted Classical names for modern ones. I drew Tyrrhenia as a rump republic left over from some partial restoration of the Tuscan crown. Tavolara is a tiny island off Sardinia that during the 19th century *here* was recognized as a sovereign kingdom; presumably *there* it joined Italy in order to maintain its autonomy.

I don't mean to cause trouble or stir any pots; mostly, this came from my own curiosity one summer afternoon. I do think that Decameron's partially-completed constellation shouldn't be discarded without cause, or certainly not for the only reason that "they're too small". After all, the two states that Sectori's developed the most are Elba and Piombino, which are as small as any of them. Benkarnell 17:26, 13 December 2008 (UTC)

Don't feel the need to apologize, you seem to have done a good job of reconciling both list. As for the small polities, Germany *here* had some rather small ones so it doesn't seem unlikely to me.--Marc Pasquin 17:31, 13 December 2008 (UTC)

In my opinion this map job seems simply great. As both lists seem capable of exist in the same time I think we could make this map of Italy as official.--Pedromoderno 14:58, 14 December 2008 (UTC)

Great work, this map!
My take on the whole thing was AFAIK (and still would be): Decameron's list of states is not QSS, but the states he has actually done work on are. I think Sectori adopted them wholesale. For the rest (i.e. Decameron's statelets with little or no work done on them) Sectori can do with them as he pleases. —IJzeren Jan Uszkiełtu? 11:40, 15 December 2008 (UTC)

Thanks, everyone! I think that all of these states have, at minimum, a flag in this folder. If there is a compromise, it has never been officially reached, because there is no list anywhere including the developed Decameron states. My goal in this map, though, wasn't to force a final decision, but to better show what and where these minor states are.
I have noticed three errors already after reading some articles. (1) Based on Alba's description, it should be stretched southward until it touches Friuli Liguria. (2) Massa should be orange, not yellow, since Sectori included it in his list. (3) Based on Correggio's description, it should be moved a bit to the west. Maybe that entire cluster of town-states needs to move: I estimated their locations based on Google Maps, which at least at the time did not show Italian provincial boundaries. I'll upload a new version once I can have a better idea of where to put that cluster. Benkarnell 17:37, 15 December 2008 (UTC)

Don't worry about stepping on toes -- Sectori and Decameron have both somewhat faded into the background...and what you're doing seems to be of a service to them and to the Group as a whole. I vote that you continue in your efforts, Ben Karnell, Cartographicus Italicus. BoArthur 20:22, 15 December 2008 (UTC)