Stingray was one of the earlist NAL superheroes, dating back to Millennium Comics' beginnings in the 1930s. He was one of many superheroes at that time, most hardly lasting more than a few issues. Stingray lasted more than most, appearing in a dozen different stories between 1936 and 1939. 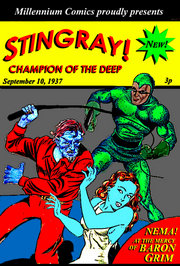 One of the early appearances by Stingray

Curiously, he had only three appearances during the War Years, usually in conjunction with Captain Commonwealth and using his super-advanced submarine to hunt down U-boats.

However, when Millennium came under new management in the 1960s, the editors decided to focus on a handful of heroes and try to foster audiences for them in particular. Some were new, but others were versions of older characters. Stingray was one of these and he proved to have considerable staying power. His stories resemble a kind of aquatic Jacques Cartier, defending the surface world from the evil designs of the tyrannical Warlords of Atlantis.

The man who became Stingray is the middle of three children and only son of a Millennium City Crown Proscecutor who was killed by a criminal gang in revenge for his successes against them. Wendall Oxford Jr. dealt with his grief (he was only ten at the time) by delving into the sciences and as a result graduated college when only sixteen! His sisters became police officers and he often sparred with them, as well as practicing how to shoot. Yet his dream was to explore the ocean depths.

His inventions left him wealthy enough to work on a fantastic submarine, the "Turtle," powered by atomic engines and faster than anything else in the seas. While exploring, he comes across a fantastical domed city which he eventually learns is the lost city of Atlantis. The blue-skinned people there are enslaved by cruel warlords who accidentally learn from Wendell about the existence of the surface world. He gets away, and when no one takes is warnings seriously, decides to fight the Atlantean Tyrants using the nom-de-guerre Stingray, a legendary figure from Atlantean mythology--a masked righter of wrongs whom (prophecy says) will one day free Atlantis.

Other than Stingray himself, the series has several recurring characters: 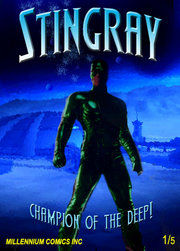 In the 1990s Millennium decided to re-invent their main heroes in response to competition from Chicago Comics. Stingray was one of those who got a makeover. He became more of a loner, someone obsessed with his own issues (the murder of his father, for example) and one the rest of the world had an easier time dismissing as a madman. Other superheroes respect but fear him, and he himself has the habit of keeping secrets obsessively (one reason he has never shared the technology of his fantastic submarine).

Likewise, the flirting and almost-romances of the earlier Stingray now gave way to something of a Don Juan character, as he had outright sexual affairs with both Nema and Pandara (who, in the makeover, gained fangs for devouring fish). He also gained allies in the Solemn League Navy who believe his warnings of underwater empires. In keeping with the new version of his character, one of these allies is a beautiful woman--Lieutenant Commander Daphne Dale (a distant cousin to the allies of Mentor)--with whom he has an affair.

Wesley Snipes has expressed interest in developing a major motion picture based on Stingray with himself as the title character.