Southeast Asia, also known as Further India, comprises a mainland portion and an insular portion. The known nations of Southeast Asia are as follows (those marked by a (?) need to be respelled to conform to the Xrirampur Romanization system and/or to conform to what natives call their land): 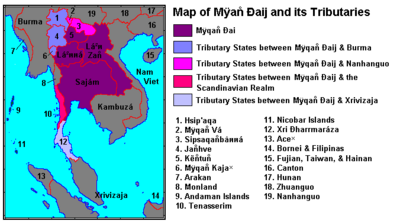 A detailed map of the mainland portion of Southeast Asia

A few centuries before the beginning of the C.E. traders from both north and south India had established contacts throughout mainland and insular SE Asia. Over time, they introduced their concepts of Indian state-craft, as well as their religions, both Hindu and Buddhist. By around 400 CE, a native Indianized state had arisen in southern Sumatra-- Srivijaya--which apparently controlled the all-important Straits of Malacca as well as much of the Indonesian archipelago, in particular the Moluccas, the source of valuable spices.

When the Spanish/Portuguese arrived in the late 15th Century, they managed to occupy the Philippines, some of northern Borneo, and the northern arm of Sulawesi (relatively isolated areas which neither the Chinese nor Majapahit considered worth fighting over), and managed to wrest the Moluccas and southern islands away from Majapahit. For that to have happened, it must be that Majapahit was distracted by (unknown) events closer to home; or perhaps their fire-power at the time was inferior to that of the Spaniards; or perhaps, too, the Moluccan peoples were tired of Javanese domination and willing to take their chances with a new colonial master.

Even so, having captured the Source of All Spices, the Spaniards must have quickly discovered how un-economical it was to ship across the Pacific, trans-ship across Mexico, then onward to Europe. So they too must have reached a accomodation with Majapahit/Srivijaya, and allowed the spices to be shipped along the already familiar and probably faster route through Java/Malacca/India/Arabia, thence to Europe.

By the time the Dutch arrived in the early 1600s, the trade routes were sewn up, two strong native states were in existence and controlled the Straits of Malacca, and there was Chinese and Spanish back-up. As a result, they managed only to establish a trading center at Banda Atjeh. Thus, they never occupied the entire Indonesian archipelago, and may have been only a very minor player in East Asian trade; they may never have reached Japan, whose limited trade with Europe would have been handled by the Spanish or Portuguese for a considerable time. 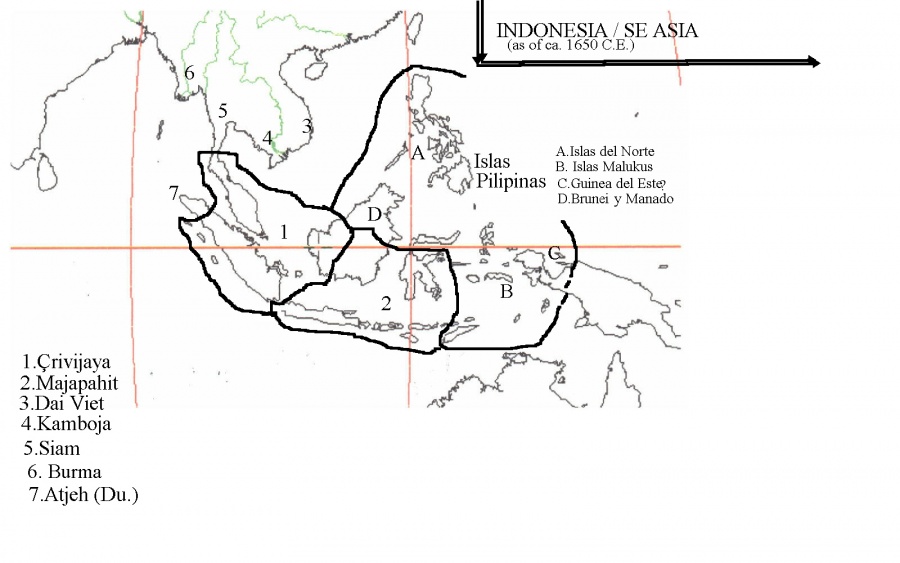 Here, then, is a tentative map of Indonesia/SE Asia as it might have appeared in the mid-17th Century. This more recent (October 2004) map shows the modern-day state of affairs in Asia and SE Asia. As we can see, the boundaries of Srivijaya and Majapahit are practically unchanged; they remain Buddhist states, with some areas of local Hinduism; the now-independent Philippines include Brunei and North Sulawesi; while Maluku is an ecotopian republic whose many islands remain the source of "Authentic Spice Islands Spices" and have become popular with tourists from all over the world.