South Florida is a semi-unitary confederation of condados on the southern half of the Florida peninsula. It became fully independent in 2016 with the establishment of its central government. This government is quite weak, however, and some Irish and Venedic peacekeepers still remain on the peninsula despite the country's independence; they are scheduled to fully depart by the end of 2020.

The majority of the country is Castilian, with Irish, Venedic, and Seminole minorities in the west, east, and south respectively.

Tensions between the commonwealths have gradually risen over the years. The other commonwealths resent the fact that the Commonwealth of the Suncoast now houses the capital and fear losing their autonomy. Various commonwealths have stalled progress at various times, making the government inefficient and ineffective. As a result, a popular movement is growing to strengthen the central government and elect a prime minister. Combined with the ever-standing issue of a possible condominium with the RTC and accompanying financial support, there is a lot of anxiety going into the elections this year.

The Florida War (2004) put a definitive end to the once-powerful state of Florida-Caribbea. It fell apart in many pieces: most island-nations reverted to their pre-Floridian independence (Cuba, Porto Rico) or were liberated by the colonial powers. Florida proper was divided into three zones of occupation: the NAL-SLC occupied the northern half of the territory, comprising the old provinces of East Florida and West Florida. After a popular referendum, the American Zone was reincorporated as provinces. The southwest was occupied by Ireland, and the southeast by the Scandinavian Realm. After the war, the SR handed over its occupation zone to the Republic of the Two Crowns. The European Zone is still occupied by the European powers. 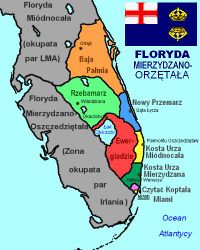 Map of the RTC's Zone of Control.
Currently, the remnants of the former namesake of Florida-Caribbea are still divided between an Irish and a RTC Zone. The dividing line runs roughly north-south, with Irish forces holding the west, including the Floridian Keys (but not the Marquesas and Tortugas, which are American), and the Coronal Zone being the east, including Miami. The line follows the west coast of Lake Okechobee, with the temporary capitol of the Irish zone in Tampa.

At the present time, there is no internationally agreed upon plans for the reunification or future constitution of the two occupied zones, however the Irish forces have declared that reunification is their goal. Efforts to rebuild and resuscitate the country have been hampered by the frequent furacanos.

The policy of the RTC has been directed at preparing the Floridians for democratic self-government on the shortest possible term from the beginning. However, both due to its unfamiliarity with the Latin American way and its own inability to make firm decisions, little progress in that direction has been made. Floridian resistance to foreign powers and resentment against their conquerors have also hampered the RTC's efforts, as has increasing guerilla and rebel activity throughout the Zone. It is unknown what a future change of government in the RTC would bring to Florida.

Irish policy in Florida has been similar, but has met with more success, having garnered less resentment through their methods. In the west, the Irish forces now sit as overseers and police, with native Floridians running the various district and municipal governments. While corruption is still endemic and the recent spate of furicanos has done nothing to help the local economy, the situation is improving. Current head of the Irish forces in Florida, General-Commandant Donnacha Ó Maolacha, has stated his hope that a constitution will be drawn up for all of South Florida some time within the next three years. However, due to the ongoing instability of the RTC Zone, the likelihood of this happening remains in doubt. One further unknown is the will of the Floridian people themselves. A sizeable percentage of Floridians in the Irish Zone seem content with small independent states, whether or not in some way confederated.

Claims of Overt RTC Colonization 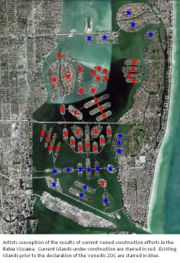 Recent news stories have brought to light the large number of immigrant Veneds to the greater Miami area, and the large amount of construction to accommodate them and their continental and decadent tastes. It seems that General Bambaryla has engendered a sort of kleptocracy, however, due to wild and uncontrolled land speculation, leading large numbers of the immigrant Veneds to purchase land in a scheme. It was unveiled to international view in March of 2009 that a large number of "islands" are being built in the Bahia Vizcaina between Miami and Miami Beach.

Many Veneds are finding themselves living in slums, waiting for their bought-and-paid-for homes to be built out of the waters of the bay. Construction companies, most notably lead by Karel Grzegorz Pieszcz assure their investors that properties will be delivered on promised time-tables, barring delays brought by furacanos.

When asked, experts suggest that this large increase of land area could result in the immigration of nearly 1,000,000 Veneds, depending on the population density of the finalized development.

In early 2006 the Irish-European Zone announced the fledgling República Conchesa or Conch Republic, an island nation of the Florida Keys. At the time of the announcement by officials, there were no details as to the level of independence the Conch Republic would enjoy. If judging by the Irish behavior to date, it would seem that South Florida is destined to end up like the Holy Roman Empire.

Open revolt in the northeastern corner of occupied Florida has given rise to the nascent Commonwealth of Four Palms. Coronal occupiers have not responded since retreating from rebel territory. The NAL is actively involved in touring and inspecting the region, and it is expected that some official talks between the NAL and the RTC will be presently forthcoming.

One proposal suggests that Tampa be the new capital, providing a clean break from the past. 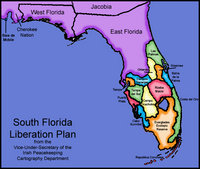 Map of proposed "germanization" of Florida.

In late April of 2006 a plan was leaked to the public by one of the Irish peacekeepers with a proposed map of the future Federal Republic of South Florida. This has been received with mixed response from the Floridians, and has been rejected in its entirety by the RTC contingent in the east. This plan was refuted by the Irish, and it was stated that a true plan would soon be released to the international community.

Some pundits have stated that this bold plan will be rejected by the Floridians, however past experience has shown with the Republica Conchesa that this is not the case. It is expected that the Irish portion will be ready for "liberation" before the end of 2007. It is unclear whether the Irish will put pressure on the RTC to begin preparations to leave South Florida.

The proposed germanization of South Florida is seen by many in the region as the only way to guarantee some form of solidity and peace.

The Oregonian delegation from Saint-Domingo has been seen visiting with Irish forces, and it is highly probable that the Ecotopic Reserve will be established.

In July 2006, the new proposed flag of South Florida was revealed, sharing colors with Florida-Caribbea but styled on the flagof Castile and Leon. The proposed Confederación de la Florida del Sur is proceeding apace, with several prospective member states moving toward autonomy, as has the República Conchesa. Surprisingly, progress has been made in Orlando, but mostly due to aid from East Florida to their Orlando cousins. Only reports of shanty towns in the RTC zone manage to reach news outlets and the RTC occupation force as well as the RTC government remain quiet on the issue.

In late September 2007, a convention was convened in Tampa under the auspices of the Irish Peacekeeping Forces to begin efforts at self-rule, using the Holy Roman Empire as a template. Talks are expected to end some time near mid-November. Representatives from the RTC zone were conspicuously lacking, however a number of former inhabitants of the region turned up to act as observers or delegates if permitted. As the meetings have been closed to the public and press, there is no word as to how the efforts are proceeding.

During the course of 2008, motions were presented by the various Floridian statelets to the Irish Peacekeeping Forces to begin the integration of the Confederación de la Florida del Sur. The first CFS constitutional convention was held in Tampa in June of 2008, but was ended by June 15th with complaints of partisanship pushing for a much more centralized government. This was fought most specifically by the República Conchesa.

Renewed attempts and drafts have been presented, but a new constitutional convention was not presented under the auspices of the Irish Peacekeepers until Christmas Day, 2008. The new convention was scheduled to be held in April of 2009.

The Establishment of the Confederation 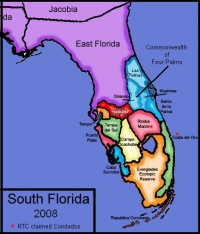 After the convention, it was decided that the Confederation would consist of five members:

The government would consist of a Bicameral legislature modeled after the NAL: a Senate composed of the heads of state of each member, and a House of Delegates consisting of the local condes. This government would gradually be established in the years to come, first with the establishment of the individual Commonwealths, and then with their association into the Confederation. Elections for the local leaders of the commonwealths would occur in 2012, the full independence of the new country and the establishment of its common Legislature would occur in 2016, and the election of a prime minister over the whole country, if later agreed upon, would occur in 2020.

Establishing Southeast Florida as a condominium with the RTC was considered, however the majority of the parties involved, especially with pressure from the League of Nations against further colonisation, voted against it. In exchange, however, all RTC citizens living in Florida were granted full Floridian citizenship and vice versa, the RTC Talar became legal tender in the Southeast Commonwealth alongside the Lira/Peso Floridiana, each country's citizens were given the legal right to travel freely in the other country, and Wenedyk became the commonwealth's second official language. In other words, this commonwealth has become an "associated state" of the RTC. A condominium status may be granted in the future, but in 2011, when the talks concluded, it seemed unlikely. This means that, de jure, elected leaders do not require approval from the RTC. However, de facto, the RTC has consistently been the source of much of the commonwealth's new silver reserves, and somehow politicians who are more friendly to the RTC consistenly have more successful campaigns than those who are not.

South Florida is bordered on the north by the NAL Province of East Florida.