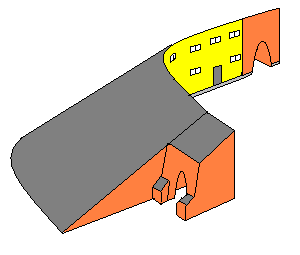 Four such buildings surrounds the main square of Smetoniškis completely, protecting it from strong winds

Smetoniškis is a town of 1,000 inhabitants in Free Lithuania. It is the second largest town in the country after the only other town, Voldemaravas. It is named after Antanas Smetona, interwar prime minister of Lithuania.

Smetoniškis was established as the second settlement in the Antarctic Colony of Lithuania in the late 1930s. Although more settlements were planned, for various reasons, including the Second Great War, Smetoniškis became the last Lithuanian settlement in Antarctica (New Lithuania). Smetoniškis never surpassed Voldemaravas in size as was expected, but despite this, it was made the capital of the area. It is generally assumed that Antanas Smetona, who was in higher position in the government than Augustinas Voldemaras, wanted the city named after him to be the capital. In early 1939, Smetoniškis had only 70 inhabitants, but during the Second Great War the number increased greatly because of refugees, although not so greatly as in Voldemaravas. After the area became de facto independent as Free Lithuania and the neocapitalist form of government was adopted, Smetoniškis became equal to Voldemaravas. But being the smaller town it caused further migration to Voldemaravas during the late 20th century, and thus the town decreased in size. It is assumed that this trend will continue (as the less people there are in such an Antarctic settlement, the more likely the others are to emigrate due to the lack of entertainment and other reasons) and some pessimists even assume that Smetoniškis will eventually be abandoned, Voldemaravas remaining the only town of Free Lithuania.