Sherrinford Bell (b. 1880, d. 1952) proved one of the architects of the post-war world. He remains a deeply controversial figure two generations after his death--a state unlikely to change. 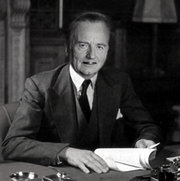 The Bells were well-off rather than actually wealthy, and of a clearly aristocratic lineage. He attended excellent schools in Germany, resulting in his being fluent in that language as well as Russian, which he studied. Between ages ten and twenty, he visited over a dozen countries and later in life proved he retained details about each one. Academically, he was brilliant and easily graduated with honors before beginning a very successful career as a barrister.

Razor-like logic and an even sharper tongue made him a formidable opponent in the courtroom. By the age of thirty-nine, he was being courted to run for office, which he did in 1920 in a "safe" Conservative borough. So able was he that in 1929 he became Home Secretary--the first of many contentioius posts as his reaction to Suffragette marchers in London was deemed by nearly everyone to have been extreme. In 1931 he was shuffled off to the lesser post of Deputy Foreign Secretary. Some thought him to have peaked. But Sherrinford Bell took this demotion and carved a position for himself. When the Conservatives returned to power, he was the obvious choice for new Foreign Secretary under Lord Halifax--and that was what he got.

Again, controversy swirled around him. In personal meetings with Adolf Hessler as well as Russian leader Vissarionov it became clear he got along quite well with both. Some historians have actually gone so far as to blame Bell for the Allianz that eventually followed, on the theory he made it seem the FK would look with favor upon those two empires dividing up Europe.

Whether he can be held responsible for such is questionable. That he initially regarded the rise of the Allianz as essentially a good thing is now beyond dispute, following the publication of his private papers. Sherrinford Bell, it turned out loathed Kemr and the Scandinavian Realm in roughly equal measure, and the NAL nearly as much. The only thing he (perhaps) hated more than those three were the Liberal and Socialist Parties. That he ended up leading a coalition including both, allied with nations he hated to attack those he admired was one of history's ironies.

At any rate, his so-called chumminess with Russia and Prussia kept him in office following the humiliating disaster at Dunkirk when the Halifax government entered into a prolonged cease-fire from 1940 to the end of 1942. In charge of negotiations with the Holy Roman Empire, Bell began by demanding Wehrmacht units to complete the English conquest of Kemr and for the return of Calais. Hessler's representatives were dumbfounded and he continued to baffle them for over a year. In fact, he rapidly became the leader of the unofficial coalition of "War Wings" in all parties. During the crisis of 1942, when Halifax resigned, Bell was the natural choice for his successor--whereupon the FK rejoined the Allied Powers almost immediately.

As such he was instrumental in the Summit of Visby, proposing "Let us behead and eviscerate Germany for once and all--better yet let that nation be castrated" as a means of insuring European stability.

Yet the man remained as disliked as he was respected. People were shocked when, barely a year after the end of the Second Great War, the mighty First Lord Sherrinford Bell collapsed from a stroke, but not saddened. Forced to leave office, he was offered a life peerage which he refused (preferring what he called "The genuine article"). Within eighteen months he was dead.

Bell's legacy is certainly one of accomplishment, not least how he managed to hold onto his positions despite the genuine dislike and fear he generated. Many assumed he was a blackmailer, holding all kinds of secrets over various persons' heads. There is no real evidence of this, although plenty of circumstantial evidence he was willing to foster that impression.