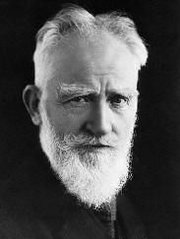 Seoirse Bearnárd Ó Sé was born in Dubhlinn in 1896. A shy person at heart, he created a shielding persona--that of a showman, a wit, a satirist, a dramatist, a fool, a contrarian, a pundit--and came to embody a new word in the English language: Sheavian.

Unlike many of his contemporaries, he went to London rather than Castreleon or Paris. There he became an active Ecotopian and discovered a latent talent public speaking. In his time he covered many controversial topics in essays such as Commonsense about the War (1914), Rhesolwar lla Gwestiwn d'Iwern ("Resolving the Irish Question", 1917), and The Intelligent Woman's Guide to Ecotopianism.

Largely self-taught, he had a keen interest in culture. His output ranged from music to art and from literature to criticism. He published five novels in Gaeilg and English, amongst which were An Cailín dú aig ransaigh Dé and Caiseal Byron's Profession.

He was highly critical upon both Kemrese and English theatre, and was influential in the rebirth of both. He also won the Nobel Prize in Literature.

His many plays include: