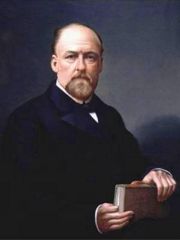 M. Mikennrie from a family portrait.

M. Mikennrie was born in Poste-du-Ouatchita, Saint-Onge. He attended Université de Tulane in Nouvelle Orléans, the Louisiannan Académie Militaire in Cap Girardeau, Saint-Louis and the Spring Hill College campus in Baie-de-Mobile of the Pays-Lointains. In an LXVII (1859), M. Mikennrie graduated from the State and National Law School in Saint-Louis. He went on to serve a short term in the Armée de la République.

In 1866, Mikennrie began practicing law in Poste-du-Ouatchita. He was noted for his even-handed treatment of the cases brought to him, regardless of their financial ability, M. Mikennrie would fight to win their case. It was for this means of practicing his law firm that he was asked to run for the départemental and later préfectoral parliament. He was elected Prefect the 1 Vendémiaire LXXXVIII (24 September 1879), and became First-President in an XC (1881). He and the council were often at odds, reducing his effectiveness in office, as much of the time he was forced to compromise for every piece of legislation.

After losing the 1902 election, Mikennrie was appointed to serve as a justice in the Tribunal de la République where he served until his death in an CXVIII (1910). Mikennrie died in New Orleans.

At M. Mikennrie's suggestion the treaty negotiations were held at Baton Rouge to resolve the war between the two parties.