Ruth Rosenberg (1889-1969) was the daughter of Leo Rosenberg, the famous Socialist and Ecotopic politician. She was among the pioneers of women journalists in the early part of the 20th century. Meeting a distant cousin, Franklin, at her father’s funeral, they were married within two years. They had one daughter, Joanna (1923-1952) with whom Ruth was never close. Upon the former's death, she raised Joanna’s daughter Naomi Gold (born 1950) as her own.

As Franklin D. Rosenberg grew increasingly frail, Ruth stood for and won a seat in the House of Delegates for Castreleon New. This allowed her to become Foreign Secretary, a post for which she was demonstrably qualified, but the real reason was to place her in the line of succession should her husband not survive his last term of office. This happened, and she ruthlessly used sympathy for her bereavement towards the administration’s agenda. 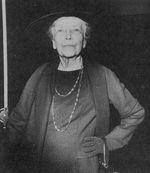 Her tenure was said to be marked by intelligent use of national resources in the new War Effort. Following the war, she served for a time as the NAL representative to the League of Nations, then as a columnist for the New Amsterdam Post. Her famous wit was demonstrated many times, such as her comment about a supposed “grass roots” movement to make Joseph F. O’Kinneide General Moderator, that said grass “was on the golf courses of ten thousand country clubs.” Upon hearing a rumor that Gwrthiern ffeil Gwilim had suffered brain damage from a stroke, she quipped “How could they tell?”

She retired from public life in 1962 and died of complications due to cancer in 1969.