Flag of the RMA

The Royal Moldovan Army is the most prominent military branch in the Kingdom of Moldova. It was kept deliberately weaker than desired during the years of SNOR-ist domination from Russia but has expanded and modernized greatly since 1990. 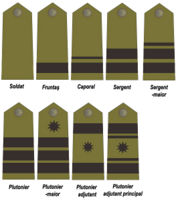 The Royals (as they are sometimes known) have been an essential factor in Moldova since that country's official inception at the end of the First Great War. Different militia groups, many composed of veterans from Russian, Hungarian and Muntenian armies, combined and were instrumental in establishment of an independent Moldova. They became the core of a the Royal Moldovan Army.

Given a lack of modern ordinance (Moldova being a rather small country), the Royals emphasized esprit de corps along with ingenuity and fierce discipline.

But with control of the country falling to the White Russians at the end of the conflict, the native army was increasingly relegated to internal police operations, to ceremonial functions and to help in border patrolling. Combat troops were kept to a minimum, while many officers' posts were filled by younger nobility to keep them out of the way (the most notorious being Crown Prince Vlad).

The fall of the SNOR ushered in many changes, not least a purge of many senior officers who showed too much loyalty to their Russian masters. A flurry of promotions followed, along with an expansion of combat-ready units and equipment including tanks and autogiros.

Moldova's army uses the continental system. In the continental system, the division is the functional army unit, and its commander the administrator of every aspect of the formation: his staff train and administer the soldiers, officers, and commanders of the division's subordinate units. Generally, divisions are garrisoned together and share the same installations, thus, in divisional administration, a battalion commanding officer is just another officer in a chain of command; soldiers and officers are transferred in and out of divisions as required.

The rank of Marshall (or "Maresal") is traditionally only assigned during time of war, but is held also by the reigning monarch. The current prime minister, Serghei Jucov, was voted the rank as a function of his role as regent for the underage King Aurel II.