Large sections of this are currently in violation of QSS and need to be reviewed and changed. Do not, by any means take this as more than guidelines. 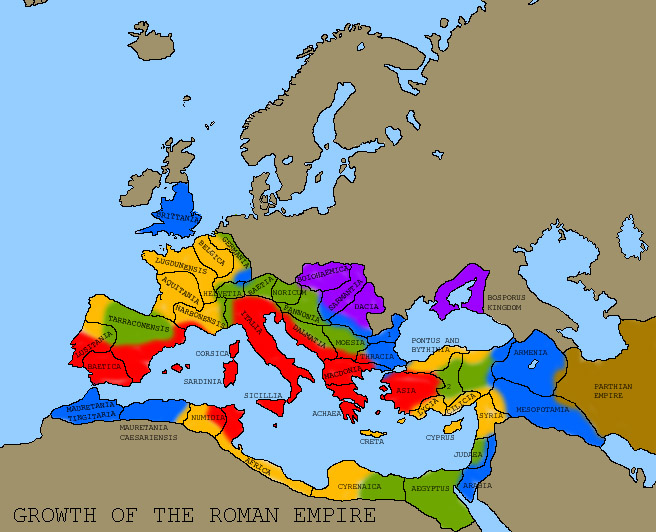 In Ill Bethisad, the Roman Empire continued in its growth until the time of Augustus Caesar where growth halted at the Rhine, the Danube or Ister and the Fortified Alps and Britannia. The Rhine nor Danube were not to be breached until almost one hundred years later.

In wake of civil war which effectively ended the Roman Republic, Julius Caesar's nephew Octavian ended up absolute ruler of the Empire. In theory the state was still a republic, but Octavian--now Augustus--had gathered all authority into his own hands under a system that was called the Principate. Whether such was his intention or no, he founded a monarchy and its first dynasty began with him and continued via his stepson (none of Augustus' own children survived him).

After Nero was the "Year of the Four Emperors," a time of great instability and tumult until Vespasian managed to win the principacy, to be succeeded by his sons and then by the relatively stable set of Antonine Emperors which ended with Marcus Aurelius.

After the invasion of Marcomans and other Germanic tribes into the Roman province Pannonia, emperors Marcus Aurelius and Lucius Verus launched a counterattack to repulse them back behind the Danube. In order to prevent further invasions from this territory, they decided to conquer the territory north of the Danube in 175 EC. Because of strong support of Senate, Marcus Aurelius succeeded. (POD: senator Tercenarius *there* decided to fund the conquest of the new Northern provinces instead of peasant rebellion in Aegyptus and Avidus Cassius usurpation in 175 EC). So, Rome had two new provinces, Boiohaemia/Marcomania and Sarmantia, both belonging to Senate. The western border was Bohemian-Moravian Upland, the Northern border Gesenke (Jeseníky), the Tatras and the Dnester river, and the Eastern border the river Prut. Capital city of Boiohaemia/Marcomania was Brennum (Pryn), of Samartia Samara (Satu Mare). Because of continuing invasions of new Germanic tribes from the north, the provinces Boiohemia/Marcomania, Sarmantia, Pontus and Dacia were abandoned by emperor Lucius Domitius Aurelianus in 270 EC. However, the already romanised population was able to hold successfully, because of their organization and technologies, for quite a long time.

Under Emperor Trajan the boundaries of the empire extended beyond the Danube or Ister into Dacia, and later beyond, into Armenia and Mesopotamia. Emperor Hadrian, Trajan's appointed successor, however, felt that the Empire had been overextended, and thus to preserve the strength of the armies relinquished Trajan's conquests in Armenia and Mesopotamia.

In Response to the Bar Kokhba Revolt of 132-135 CE, Hadrian recruited colonists of civilians and soldiers from all over the empire and transported them to Judaea. It is reputed that a large number of the settlers came from Dalmatia, a section of Illyricum.

Hadrian's intent was to thoroughly romanize Judaea. Only colonists could hold government positions, and the use of Hebrew or the local Aramaic wsa discouraged, and discontent of the Jews was largely quelled, for a time. In response to the continual battering of the Picts and Scots, Hadrian ordered construction of a wall, almost twenty feet high and eight feet thick the width of the British Isle.

The Roman Empire continued in peace for a time, but after the good emperors Antonius Pius and Marcus Aurelius, the Empire fell into decline.

Aurelieus' debauched son, Commodus lived riotously, squandering the funds of the Empire, in twelve short years he had weakened the Empire and allowed barbarians to enter the land and colonize as well as join the armies.k He was assassinated to the short-term relief of Romans in 192 CE.

The rule of the Severi was to follow, and was one of military squander, assassination and overall mismanagement. Following this clan of emperors were a series of generals from 235-249. Almost 20 men and generals claimed the throne for a time during this turbulent period, though only five were officially accepted as emperor.

The turning point of decline came in 251 as Decius defeated the invading Goths in the Danube. In the terms of peace between Rome and the Goths, Decius offered forth a plan. If the Goths were willing to join with Rome, Rome would accept them as citizens and give them the Eastern portions of Asia Minor as well as the entire province (albeit small) of Armenia. Though this seemed to be a surrender of territory, Decius preferred to lose a specific amount of territory to a known enemy than to lose all of the Empire to an irrepressible foe.

It was his plan to create a buffer between Rome and Empire and the threatinging Parthians to the east. This peace caused a split among the tribes of the Goths, and the Ostrogoths chose to remain on the shores of the black Sea, while the Visigoths moved to the waiting territory or Armenia, and Eastern Aisa Minor.

Decius was pleased as they were ready to defend 'their' lands against the pushy Sassanian King, Shapur I, who had begun his reign in the early 24s by raiding Roman ttowns. With the Visigoths at least temporarily domesticated, Decius was able to turn his attentions elsewhere, though sadly only for a short time.

Vallerian and Gallienus removed Decius from power and had him executed upon his return to Rome. They had, in Decius' abscence, defeated two rivals, Gallus and Aemiliaus. This father-son team were well suited to the battlefield, and seeing an opportunity to repulse the Sassanians with the aid of the Visigoths set forth on a campaign. Unfortunately plauge broke out in the ranks of troops, and reduced their numbers. They sacked twice Susa, initially in 257, and again in 260. Unfortunately, Vallerian and half of the surviving troops were trapped in the city by Shapur I's troops. Vallarian then made the mistake of agreeing to meet personally with Shapur, where he was captured along with officers, and he was Shapur's horse-0mounting step for the rest of his life.

Presuming weakness in the Empire, Odaenath of Palmyra declared himself King of Palmyra and independent of Rome, though he died shortly thereafter, it is presumed, at the hand of his wife, Zenobia.

Aureilian, Gallienus' embattled heir, upon securing his throne two years after Gallienus' death, proceeded to reign in the errant Palmyra. With the Visigoths occupying the weakened Sassanians, he turned his attention to Zenobia and her rebel 'kingdoom'. Rather than dispatch the 'Queen' Aurelian chose instead to isolate her in a villa - depriving the Palmyrans of a rallying martyr.

Aurelian and the commander of the armies, Claudius Gothicus dealt heavy blows to the Alemanni, a tribe invading from Germania. Aurelian and his appointed successor, Probvus sought to restore Rome to it's former glory, and as Corus, Probu's successor declared, Nova Pax Romana was established. Grain began to be grown again in Italy, restoring balance financially, decreasing dependence on imports, and though strongly supported by government stipends, trade was rebuilt, restoring the affairs of the Empire to a state much closer to those in which Marcus Aurelius had lived.

DIOCLETIAN AND THE TETRARCHY

Diocletian Dalmaticus, as many called him, hailed from the shores of Illyricum, the region known as Dalmatia. Being an innovator and straight-spoken, Diocletian initiated a series of reforms in government, economy and the military. He elevated himself as emperor and barred access to himself behind a new form of bureaucracy. He made no pretense as he opnly declared himself dominus - gone forever were the days of the princeps or man of the people.

Realizing that there was very little standing between the provincial governor-warlords and civil war. In order to prolong Nova Pax Romana he separated civil and military powers in the provinces, appointed a dux or duke to lead the army. In order to limit the available power of the duces, Diocletian nearly doubled the number of provinces to almost a hundred, thus reducing the man power of each dux and assuring the peace.

To facilitate governing such a large empire, Diocletian instituted thirteen diocese or regions, governed by a vicarius or vicar. Above the vicars Diocletian appointed praetorian prefects. These governed the four quarters of the empire.

It was at this time that Diocletian began his efforts to seek to stop the problems of invaders. In Germania Superior he selected a city-cite and from the Senators of Rome and other loyal citizens he selected colonists to strengthen this recently overrun area. The Alemanni were not subjugate but rather were offered the opportunity to enjoy the prosperity of Rome. Their chieftains were offered high roles and stipends in the newly established government, provided they learn Latin. Through the chieftains the Alemanni tribes were offered the prosperity of Rome. The Senator-colonists learned the ALemmanni tongue to be able to communicate with the people, but after the first ten years, Latin was enstated as the official language and the children of the Alemanniw ere schooled in Roman culture, language and were made citizens.

While the Alemanni were accepting of this treatment, Diocleatians attemps at civilizing the barbarians were largely a failure. The Ostrogoths on the Black Sea's shores resisted the civilizing influence, and the Visigoths in Armenia and Eastern Asia Minor, having realized they were being used left their settlements vacant and settled with their cousins, taking the vacant province of Dacia as their own, and resisted and rousted any Roman advancement into the province. The Scythians who resided in the area were equally resistant to the invaders.

To the role of praetorian prefects he appointed three others, the primary prefect being Rome and Italia, which as was historically viewed superior to the others, at least in the onset of his reign. The appointed praetorians were first Maximian, and then Galerius and Constantius, forming the Tetrarchy, which was heavily propagandized. It was not openly referred to then, though later it was commonly called dominus dalmatia or Rule of the Dalmatians, all four of the Tetrarchs hailing from the Dalmatian coast. While Maximian and Constantius reigned in the western prefectures, Diocletian chose the stable east and took Galerius with him. Maximian ruled from Augusta Trevorum, Constantius from Rome or Milan (according to his fancy), Galerius from Thessalonica and Diocletian from Nicomedia.