Also known as the "People's Chess", "Field Game", "Little War" and as "Jeu de Drapeau-tombe" [Game of Flag-fall] in Louisianne, republican chess is a variant of the traditional boardgame commonly played in western countries. 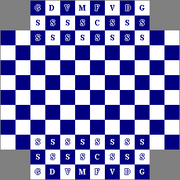 It was invented in France after the 1789 revolution as a way to lessen the monarchist side of that most popular of game. At first, Its instigator (Guillaume Yurgelevich, a Russian republican expatriate), wanted to change only the name of pieces and a few game terms. With time however, new rules were devised by its enthusiasts in an attempt to make a more enjoyable experience by bringing it in-line with modern warfare. After the declaration of the Empire, a disappointed Yurgelevich moved to Louisianne and managed to propagate the idea there.

For the next century, Republican Chess remained solely a Louisiannan pastime with only the odd foreigner coming to the largest tournaments. This changed in the early 20th century when Louisiannan diplomats introduced the game to some anti-monarchists countries who took to its revolutionary spirit. To play the game became not only a novel pastime but in a way, a statement of political belief. The game became identified so much with revolutionaries that it was banned in some countries along with with other public expression of discontent.

Nevertheless, the game became widespread enough for international tournaments of Republican Chess to be organized. Starting in the 1960s, the CSDS became a fertile ground for Grand Masters and a strong rivalry developed between Danubian and Louisiannan players. 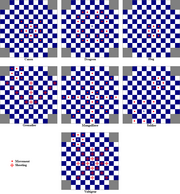 Both sides have an identical set of pieces. One set is blue and the other white, however some sets produced in ex-CSDS countries replaced the blue set with a red one.

One interesting innovation is the introduction of a rule called "Interdits" (forbiddances). In an attempt to simulate real-life, some pieces cannot be captured by certain others: