Railways of the NAL

Railways are one of the principal means of transport in the NAL, both for goods and passengers. Local commuter railways are found in every major metropolitan area. Several main lines are electrified, while others continue to rely on diesel power; this is changing with the advent of battery-electric locomotives and Tesla-powered locomotives, however. Steam engines are essentially confined to museums and railfan tourist groups.

Some famous lines include the Lange Eylandt RR (getting out of the way of the crowds at Pennsylvania Station in Nieuw Aamsterdam is a survival skill to be learnt quickly, when the announcer calls for the LERR!), the New Castreleon, Ontario and Western and the now defunct Chesapeake and Southern (renowned for the famous swing hit Ciatanwga Choo-Choo: "Pardon me, sir, is that the CIATANWGA CHOO-CHOO? Yes, sir! - Track Twenty-Two! Then tha can tell me what's new...").

The most famous train in North America is the curious German Zeppelin Train, captured during the GWII and later sold as surpluss to an American buyer. See the news article of 8 October, 2003. Since 2006, the restored Zeppelin Train makes regular excursion runs into the countryside outside Baltimore. 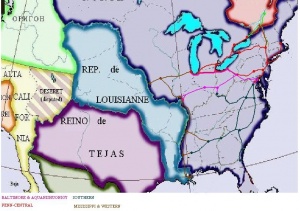 A map of the principal railway territories

The largest and most famous American railways are:

The NAL has many so-called "inter-urban" railways, electric connexions of local tramways ("streetcars"). These are doubtless too many to number, but some of the largest and most famous are:

Then come the "Joint Railways," that is those owned by the several of the greats equally; most of these are short railways operating in terminal regions -

A map of the principal railway territories is available online here.