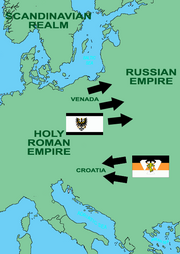 General operational map for the beginning of Operation Rhinegold

Operation Rhinegold was a massive military offensive, the attempted conquest of Russia by the Holy Roman Empire. Begun in Spring, 1943, the operation proper bogged down before winter of that year (although only after achieving spectacular results). That was when the Wehrmacht's Russian Korps was given to General Johann Rommel, generally regarded as a true genius at tank warfare.

Many members of Adolf Hessler's staff believed entering into a second front of the Second Great War until the Allied Powers were much more reduced in strength to be far too dangerous. Hessler did not disagree, but feared he had little choice. Vissarionov, according to him, was preparing to attack and the initiative was too precious a commodity in war to give up. Thus Operation Rhinegold began as a contingency plan as early as 1942, and then serious effort to put it into effect began in February, 1943.

Hessler was correct. The White Army had its own invasion strategy, in which the invasion of Croatia was intended as a massive feint. Russian plans called for entangling Imperial forces in the Balkans then launching a spearhead directly into Prussia, the heart of the HRE.

In preparation for the Prussian attack, Hessler moved 3.2 million men to the Russian border, launched many aerial surveillance missions over Russian territory, and stockpiled vast amounts of material in the East. HRE had trouble devising a strategy. OKW (Oberkommando der Wehrmacht) desired a straight line thrust to Moscow, but Hessler wanted to take the resource-rich Ukraine and the Baltics before turning to Moscow. The resulting squabble disrupted logistical planning for the invasion.

The ultimate strategy Hessler and his generals agreed upon involved three separate army groups assigned to capture specific regions and large cities of the Russian Empire. The main Prussian thrusts were conducted along historical invasion routes. Army Group A (North) was assigned to march through the Baltics, into northern Russia, and either take or destroy the city of Petrograd. Army Group B (Center) would advance to Smolensk, and ultimately Moscow, marching through what is now Belarus and the west-central regions of Russia proper. Army Group C (South) was to strike the heavily populated and agricultural heartland of the Ukraine, taking Kiev, before continuing eastward over the steppes of Southern Russia all the way to the Volga and the oil-rich Caucasus.

Rapid SNOR-ist industrialization in the 1930s had resulted in a Russian industrial output second only to that of the NAL and equal to that of both the Holy Roman Empire and Scandinavian Realm. In 1943, the Russian armed forces in the western districts were outnumbered by their German counterparts. The overall size of the Russian armed forces in early May 1944, though, amounted to a little more than 5 million men, more than the German land forces deployed for Rhinegold. Moreover, on mobilisation the White Army gained steadily in strength, and it could also deploy a greater share of that strength on this front than the Wehrmacht. While the strength of both sides varied, in general it is accurate to say that the 1943 campaign was fought on terms of approximate numerical parity.

In some key weapons systems, however, the Russian numerical advantage was considerable. In tanks, for example, the White Army had a large superiority. The number of artillery pieces and aircraft was also heavily in the Russians' favor. However, the most advanced Russian tank models were not available in large numbers early in the war--a fact with disasterous consequences for the Russian forces.

The Russian numerical advantage was also more than offset by the greatly superior average quality of German planes and airships. The White Air Force was equipped with large numbers of obsolescent aircraft, mostly biplanes, and only a few of the newer fighters. Few aircraft had radios and those that were available were unencrypted and did not work reliably; air combat tactics were primitive. There were almost no airships.

The White Army was in the midst of reorganizing the armor units into large Tank Corps, adding to disorganization. More, a significant (albeit small) percentage of its forces were engaged in Croatia and deployed as reserves for that front. On the other hand White ground forces were extremely well organized, and were mobilizing en masse all along the Imperial borders for a Snorist invasion of Europe slated for June, 1944. Rhinegold actually was a pre-emptive strike that capitalized on the massive White Army troop concentrations.

The Course of Battle

When Russia and Serbia finally invaded Croatia, it took Prussia less than a day to respond: From Veneda, it launched a massive attack against Russian-occupied Lithuania, and from there rolled quickly into Belarus and Russia proper. Russian plans had called for the HRE's attention to be distracted south, but Hessler refused to give up the intitiative. He implemented Rhinegold immediately.

All three army groups found themselves facing a front in the process of organizing its assault centered around a single army group. Faced with three hard thrusts into Russian territory, the defenders found themselves having to split their reaction, thus negating an important military precept--Concentration of Force. Far more devastatingly, Prussian tanks were present in large numbers, far superior to the Russian machines that were on hand at the moment. Worst of all (from the defenders' viewpoint) the massive attacks by the Luftwaffe quickly overwhelmed and virtually destroyed most of the White Air Force.

In the long run, this forced the Snorish regime to build their air forces from scratch, resulting in a cutting edge military arm specifically aimed at taking on the Luftwaffe and winning. But that was later. At the time, loss of air cover crippled the Russian forces in the north.

Russia might easily have fallen were it not for several factors:

As a result of these factors, Operation Rhinegold never had a chance to properly consolidate its successes. It must be judged a tactical victory but a strategic failure, because instead of ending a possible threat it resulted in an on-going wound to the Holy Roman Empire--a wound that ultimately proved fatal.