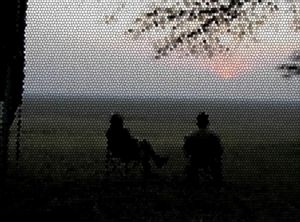 A mosaic on the floor of Lithuanian Ministry of Colonisation in Vilnius depicting two Lithuanian settlers watching the sunset over the savanna of Naujojo Vilniaus apskritis. Currently it is shown in the Museum of the Lithuanian History.

Immedietly after the establishment the Maasai uprising followed, but it was quelled. Ethiopia stayed out of the conflict. Lithuanian-Ethiopian relations were fixed after Lithuania renounced its claim to Užneris region that was formerly considered to be part of Maasai (and therefore Masaja and later Naujojo Vilniaus apskritis) by the Lithuanian authorities. The settlement of Užnerio Dvaras was evacuated.

The problems with discontent, however, continued, and famine stroke the area in 1936, after which several more uprisings followed.

The first vadovas (leader) of Naujojo Vilniaus apskritis was Aitvaras Geležinkelietis. After the 1936 famine and the later uprisings a military rule was initiated and karvedys Povilas Plechavičius was appointed as new vadovas.

Church of Our Lady of Lake Smetona, completed in 1935, drew Christian pilgrims and sttlers to a town of Paežerys in the western part of apskritis.

Naujojo Vilniaus apskritis continued to be a hot spot due to the pressure of native Maasais and the Slavs that were also from Lithuania-proper, but their situation was worse than that of Lithuanians at the time. With the Slavic revolution in neighboring Buganda state the sabotages, terrorism and such increased in the apskritis. As such, large ammounts of military were deployed in the area. They were meant not only to fight possible uprisings, but as well possible Chinese, Ethiopian or Bugandan invasions.

The main project undertaken in the area was the construction of the Great Southern Railroad which connected Naujasis Vilnius in the west to Naujasis Kaunas in the east and in turn made moving freight and people accross the apskritis much faster. The first stretches of the railway in the area were built in 1932 near Naujasis Kaunas and the project was finally completed in 1937. In 1937-1939 several branchlines were opened. The improvement of local roads was also an important goal but the road network was primarilly designed to serve as a mean to get to the railroad. Gravel roads prevailed but some tarred roads were built around Naujasis Vilnius, Naujasis Kaunas and in the highlands.

Another major project was the northern and southern defensive lines meant to defend the area from Ethiopian and Chinese threats. Initially commenced in 1931 the construction was halted due to Maasai uprising in 1934. The project was changed as it was understood that that with the normalization of relations with Ethiopia a larger threat may lie from local residents rather than Ethiopia or China. Construction resumed under corrected project in 1935, virtually stopped again in 1936 due to Slavic uprising and restarted in 1938 on lower funding. In 1939 only a part of the fortifications were completed.

Initially the economy of the area depended greatly on the agriculture but a diversification campaign was initiated and industry was established primarilly concentrated in areas around Naujasis Vilnius and Naujasis Kaunas. The apskritis was meant to be able to support itself in case of occupation of European part of Lithuania by foreign powers and therefore such institutions as coin mint were established. The construction of a hydroelectric plant on Pietų Nemunas. However the evaluation of situation undertaken in 1938 claimed that the apskritis would be able to survive without Lithuanian support only since around 1945. The opposition doubted these assumptions and believed that local Slavs or the people of African race would quickly topple local administration in case of the fall of Lithuania or the territory would be annexed by either China or Ethiopia. Such concerns and detarioriating stability in Lithuania and Europe were among the forces that led to the establishment of New Lithuania colony in Antarctica.

During the Thunderstorm War Naujojo Vilniaus apskritis was invaded by Russia. With the Disaster of Indian ocean (a sabotage attack on troop transports) doing large damage to the Russians, the invasion failed after several months of fighting, and a peace treaty was signed. According to this peace treaty, the area had to become an independent and neutral state however and recognise the Russian occupation of Lithuania-proper that happened several months ago. This happened, and thus Naujojo Vilniaus apskritis became the state of Pakštuva.

Currently, the lands of this apskritis are partitioned mostly among Chinese East Africa and Maasai.