The Mujahideen (Arabic: مجاهد muǧāhid, plural مجاهدين, muǧāhidīn, "strugglers" or "people doing jihad") are militant Muslim fighters. Since the Hajj of 1980 they comprise multinational, stateless armies and call for an international Jihad.

The Birth of Modern Mujahideen 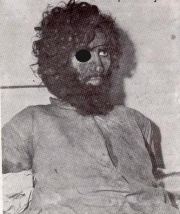 The Hajj of October 1980 (Dhu al-Hijjah 1400 according to Hijri calendar) was much politicized. The recent invasion of the Moghul National Realm by Snorist Russia and the war between Iraaq and Persia made the Muslim world face wars against nations of other religions.

For many pilgrims, and for Muslims in general, the idea of defending their brothers in the faith seemed attractive. Sheik Juhayman al-Otaibi, a Saudi preacher and former colonel of the Ikhwan (former Islamist militia and present praetorian guard of the Saudi royal family), was able to unite an army of volunteers among pilgrims of various nationalities and issued a fatwa calling for the “defense of the Muslim lands and a Jihad against both Satans, i.e., Christian Orthodox Snorist Russia and Zoroastrian Persia”.

Sheik al-Otaibi found support from both the Saudi Arabian and the Iraaqi theocratic regimes which armed, trained and funded what was called an International Muslim Brigade.

The first Mujahideen arrived in the Moghul National Realm in early 1981. There were several groups, independent from each other although all having in common the purpose of expelling the Russians.

The Mujahideen fought with guerrilla tactics and their fighting capacity evolved while new waves of fighters, better trained and equipped, arrived in 1982 and 1983. Sheik al-Otabi personally commanded one of those groups (the International Muslim Brigade), financed and equipped openly by the Saudi regime. In another group, led by Iraaqi Mujahideen, there was another one of the most famous foreign fighters in the Moghul War, Osama bin Ladin, also a Saudi.

The Russians found themselves in a difficult war for which they were not prepared. The mountainous ground, perfect for ambushes, and the lack of cooperation from the natives made their presence a military failure with plenty of casualties and loss of weapons.

Finally, Russia signed a ceasefire in 1984 and withdrew the next year. Throughout the Muslim world the Mujahideen achieved hero status for defeating one of the major military powers in the world.

Sheik al-Otaibi returned to Saudi Arabia where he was awarded some of the highest decorations, later being promoted to general.

Initially, bin Ladin joined an Iraaqi-led group of Mujahideen fighting in the Moghul National Realm. Later he left that militia and formed his own, al-Itihad (the Union).

His Mujahideen were rather different from the others. Al-Itihad ideology added libertarian ideals and even ecotopic ones to Islam. His intention to reform the religion resulted in fatwas being made against him by several clerics from conservative Islamic regimes.

Unlike other Mujahideen armies, al-Itihad fought against the ultraconservative Muslims in Sanjak (1991) and in the Basri Rebellion (1992 to 2001). Bin Ladin was killed in Iraaq in 2001 fighting against Saddaam Hussayn’s forces.

Despite the Treaty of Friendship and Co-Operation signed with Iraaq (1980), Saudi Arabia was never involved directly in the Persia-Iraaq War. Instead, the Saudi regime backed the Mujahideen with funds, weapons and training facilities.

They were also generously provided with weapons by the Sheik Hussyan regime in Iraaq. Mujahideen were present fighting against Persia during the whole war. Owing to the use of chemical weapons during the stalemate years (1982 to 1988) this war was by far the deadliest for the Mujahideen.

Most of the Mujahideen in the Persia-Iraaq War were Saudi Arabians of Sheik al-Otaibi’s International Muslim Brigade, here under the command of one of his major collaborators, Abdullah Hamid Mohammed al-Qahtani. It was the war in which more Saudi were killed, it being estimated that there were between 10,000 and 20,000 dead. Some sources assume even more casualties.

Conflicts in the Balkans

Mujahideen forces fought together with the Muslims of Sanjak against the Serbs of Sanjak and the Dalmatians between 1988 and 1999. Here Mujahideen were grouped in the El Mudžahid unit. After Serbia conquered Sanjak they entered Sanjak in great numbers in order to protect and aid fellow Muslims against the Serbs. The number of volunteers is still disputed but it is believed that there were at least 1,000. The majority were Saudi, Iraaqi and Turk Mujahideen, although there was a growing number of fighters from the Islamic Kingdom of Guinea.

Another unit was also formed to fight against Dalmatia, the Legion of Allah, which tried to conquer Kampa da Miarle. The Legion of Allah was unsuccessful being repelled several times by the Dalmatian army in a series of battles.

Following the success of the Islamic Revolution in Sanjak (May 1991), the radical members of the Albanian Muslim community tried to establish an Islamic republic in Albania as well. A small number of Saudi and Turk Mujahideen aided the radical Albanian Muslims but the attempted revolution failed because Albania's secular institutions kept religious extremism at bay and quite simply, Albania is a majority Christian country and the Muslim minority was too small to be able to carry out operations to upend the entire country. After the failed takeover, even more Albanian Muslims have converted to Orthodox Christianity or Catholicism or fled to Turkey or the West, thus decreasing Albania's Muslim minority yet again.

From 1991 to 2003, Saudi-backed Mujahideen once again aided the Sheik Hussayn regime during the Basri Rebellion. In a time when Iraaq faced an international embargo, following the invasion of Kuwayt, this support proved to be a major help for the survival of the Iraaqi theocratic regime.

Despite this help, the Basri were not defeated, but their victory was harsh. Both Iraaqi regular and Mujahideen forces are known to have committed plenty of war crimes.

The War of Nagorno Karabakh

Following the fall of Snorism, Azerbaijan and Armenia were involved in a conflict for the control of the Nagorno-Karabakh enclave, which had an Armenian ethnic majority. Some hundreds of Mujahideen from the Islamic Regiment, mostly Saudi and Turks led by Samir al-Suwailem (a Saudi), sided with the Azerbaijani forces but without success. By 1994, when a ceasefire was signed, Azerbaijan had lost control of Nagorno-Karabakh which represented 14% of the whole territory.

Al-Suwailem, at the time only 25 years old, was captured in 1994 by Armenian forces and later executed. Both Saudi and Iraaqi theocratic regimes celebrate him as a martyr.

Saudi Arabia reportedly supported with funds the Armed Islamic Group during the Algerian Civil War of the 1990s. They also sent Mujahideen militias.

After the overthrow of the Sheik Hussayn regime in Iraaq (2003), Saudi Arabia remains the only country to back officially Mujahedeen movements although there are suspicions that other countries are also backing those movements. It is believed there are several training camps in Saudi Arabia as well as in remote mountain areas of the Moghul National Realm and the Islamic Kingdom of Guinea.

Mujahideen are of several different ethnicities. The most numerous are always the Arabs, coming especially from Saudi Arabia and Iraaq and in smaller number from the Bedouin Free State and the Wahhabist emirates in the Thousand Emirates. Turks are the second largest in number followed by a real melting pot of ethnicities from the whole Muslim world.

The Hajj remains the major recruitment centre for Mujahideen although the government of the Hijaaz considers it illegal.

Because they are not united, the several Mujahideen armies have adopted a number of different flags but they all use a common pattern: a black field, symbolizing the Prophet Muhammad, with inscriptions taken from the Quran, such as the Shahada (There is no god but Allah and Muhammad is the messenger of God), the Takbir (God is Great) or the Basmala (In the name of God, Most Gracious, Most Merciful). Below are some examples: