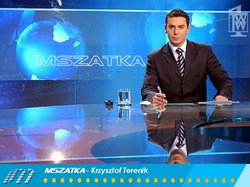 „Mszatka” is the most popular name of Venedic language news service.

Citizens of RTC get used to hearing or watching news services so much that every channel of any public or commercial station has a strict schedule of broadcasting news services. Most radio stations broadcast one every hour or half an hour (this could be the origin of WRW's famous publicity program “Mąd par Ura” and it’s later edition “Mąd par Siemiura” by Waldemar Fiorarz).

TV stations are supposed to have two or three issues during midday and one or two in the evening including one main service. One of the oddest and most unusual things is the time when one of the biggest services, TWW 1’s “Mszatka”, is transmitted. The main issue of TWW 1’s “Mszatka” has been transmitted for more than 30 years every day on 19.30 CET. It is very unusually time for news services when most of other main issues start on full hour. TWW 1’s “Mszatka” position on “viewers market” was and still is very strong.

In 1980 in Kordyn a brand new commercial radio station RFM FM (Radio, Foca, Muzyka on FM) stared to broadcast daily program with one news service every half an hour. During 20 years RFM FM became the second largest commercial broadcaster in RTC market with 35% of market.

“Ciępiestać wietrza” (Glass weather) is the poetic name of a second phenomenon closely related to the Veneds' talent for news services. During 70’s and early 80’ when only one news service was broadcast in TWW almost every TV receiver was set on “Mszatka” witch was giving a magnificent view in cities suburbs and big housing estates at the evening. The “Ciępiestać wietrza” became title of popular 1983 rock song by Małgorzata Okitka and her former band “Łombard” and became unofficial anthem of Venedic “new wave” music.