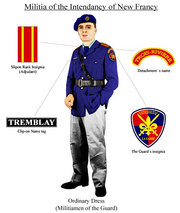 Unlike most large nations in the world, the Intendancy of New Francy has no army. Though many other countries have made similar claim regarding their so-called "Self-Defence Force" or "Security troops", in the the case of New-Francy, this is meant quite litteraly.

During colonial times, the regular army in New Francy was made up entirely of non-local troops. The locals were still expected to serve, but in the militia. During the uprising that resulted from the French Revolution, the Milice sided almost to a men with the Royalists and the regular army with the Revolutionaries. With the end of hostility, it was the former that made up the bulk of the defence in the early 18th century and the tradition was made law shortly following the patoisant revolt.

One reason why it managed to stay that way has to do with the simple lack of a need for a standing military force: the Intendancy does not plan on invading anyone soon and the only other country with which it share a border is the NAL, seen, at best, as an ally and, at worst, as inoffensive. They have limited themselves to that equipment the Intendancy needs to protect its borders and maintain internal order.

There as been a few initiatives over the years to try and change the matter but none have gone anywhere. One such initiative came about due to the "Black Scare", the fear that SNORist Russia might try to invade North America through the North Pole. To this, a politician once famously retorted: "When that happens, we'll just have to arm Father Christmas and wish him luck"

The Milice is an all-civilian volunteers organisation and thus not subjected to any type of military justice or code of conduct and though some are armed, they lack the type of fire power usually associated with an army such as tanks, artillery (apart from coastal defence) and naval destroyers. In this sense, the Milice is similar to other non-military uniformed organisations such as the coast guard of some countries.

The milice is divided in 2 services: La Suretée whose purpose is law enforcement ("Maréchausée") and fire investigation/fighting ("Incendies") and La Garde which is charged with protecting the citizens, institutions and territory of New Francy from outside threats. The first service thus take care of things such as highway safety, foot patrols, and criminal investigation while the second has sections that are equivalent to other countries Coast Guard, custom/border agents, search and rescue, consular protection, etc....

There is also a joint task force known as Groupe d'Intervention Spécial (GIS) considered to be the elite of the Milice. It is made up of members from various sections and was originaly formed to combat local and foreign terrorists. In recent years, its services have been use to combat organised crime syndicate, smuggling rings and, on a few occasions, for peacekeeping missions abroad (notably Saint-Domingo). In 2010, it served as the nucleus for the newest service, the Republican Guard, a more heavily armed version of it.

Another joint task force of the 2 services is dedicated to the protection of the League of Noble Emigrees's building and personnel. They are a specialized group who are the crème de la crème of the Milice. These agents serve the LoNE exclusively, and are often assigned to visiting delegations, or as a support to the various royals' personal bodyguards.

[1]rank insignias of the Milice