The van Lustbader family came to what was then called "New Batavia" in the 1670s. One scion of that familial tree discovered the river which bears their name. Martin van Lustbader was the last General Moderator to have taken part in the convention which created the NAL, and who signed the original Solemn League and Covenant documents.

An often-quiet but very resolute figure, he was the single most prominent member of the group that called themselves "Loyal Republicans," that favored the legislative power of Parliament over that of the General Moderator (as opposed to the Confederationalists, who looked to a strong executive). Indeed, it was his personal prestige that allowed the Loyal Republicans to exist as long as they did. Soon after he left office, the party was absorbed by the large Whigs whose ideology was virtually identical.

Martin van Lustbader, although sixty years old upon assuming office, saw a tumultuous administration. During his tenure the 1828 War took place, between the NAL and Louisianne. To the distress of many, the GM insisted upon a peace treaty which returned matters to virtually the status quo of before the war. But he was most proud of seeing Slavery in the NAL whittled away and abolished while he was in the Oblong Office.

Illinoise became a province of the NAL while he was GM. 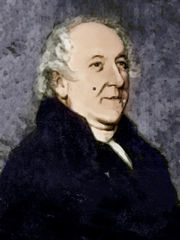 Retrieved from "http://ib.frath.net/w/Martin_van_Lustbader"
Category: General Moderators of the NAL