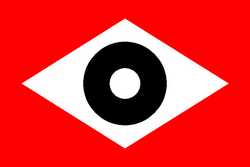 The MNP (Movimento Nacionalista do Paraná – Paraná Nationalist Movement) was an extreme right-wing movement from the the 1930s to the 1970s, still believed to be active in the underground. Founded and led by Piero Salato, a mediocre poet who reached some fame during the 1922 Modern Art Week, the movement had the outlandish superficial trappings of all radical groups. Among its chief characteristics were:

Visible as a black-shirted paramilitary organisation with uniformed ranks, highly regimented street demonstrations, and aggressive rhetoric, the Menistas borrowed much of their propaganda campaigns from SNORist materials. These campaigns included denouncements of liberalism and espousals of fanatical nationalism (out of context in a heterogeneous and tolerant nation). In spite of their elitist behaviour, they were essentially petit bourgeois. In particular, they drew support from some military officers.

The fight against Jews was always a subject of polemical discussions among Menist leaders – Salato was opposed to anti-semitism, while Gustavo Barros, the chief of the Menist Militia (MM – a paramilitary group), showed strong hate of the Jews. This led to at least two serious ruptures in the Menist movement: one in 1935 and the other in 1936, when Salato almost renounced leadership of the movement.

In the mid-1930s, Paraná underwent a strong wave of political radicalism. The government led by Getulio Vargas was then weakly supported on the sympathy of workers because of the new labour laws backed by the president. But left-wing parties were growing and taking leadership of the working-class associations.

In the face of these advances, Vargas turned to Menism, the only mobilised base of support on the right, which was elated by his intensive crackdown against the Pananaän left. Having crushed the left, Vargas gradually started trying to co-opt popular movements in order to attain a widespread support base. Menism claimed a rapidly growing membership throughout Paraná by 1940. This was especially so among immigrants of European descent who had opted to become Paranaäns under the pressure of the Great Wars in their homelands. Menism began filling their ideological void.

In 1943, following the disintegration of Vargas' delicate alliance with labour, and due to his coalition with the Menists, Paraná entered one of the most agitated periods in its political history. Violent brawls started in major cities, and by mid-1944 national politics had been drastically destabilised.

When Vargas established full dictatorial powers under the Estado Novo in 1944, he stripped the movement of its power. Though the Menists favored Vargas' hard right turn, Salato was overly ambitious, with overt presidential aspirations that threatened Vargas' grip on power. In 1945, the Menists made their last attempt to achieve power by attacking Anchieta Palace during the night. They were almost able to enter and kill Vargas, but police and army troops arrived at the last minute.

The Paraná Nationalist Movement disintegrated after that failure, and some years later Salato founded the Party of the People (PP), which maintained the Menist ideology without the clothes, salutes and signs. In 1969, many of the former members of the Paraná Nationalist Movement took part in the military coup that tried to overthrow President João Goulart, of strong socialist leanings. A movement in favour of democracy triumphed on the political arena, making radicalist manifestations not only unnecessary but outright unpopular.

Today there are minor groups in Paraná which uphold the MNP’s tradition, but they have no political significance. There exists, however, clear evidence of rapprochements with radical political associations (such as the American Snorist Party) and other groups throughout the world – some frankly criminal, most notable among which is the Xliponian Mapukra.