Lëtzebuergesch, or Luxemburgish, is a branch of Central High German, also known as Middle Franconian. It is the national language of Luxemburg and has minority status in Jervaine. It is similar to Luxembourgish *here*, except that much of the French influence is replaced with influence from Jovian. Jovian is the language of prestige, spoken by the only neighboring country that has never occupied or subjugated Luxemburg. Its influence is most apparent in day-to-day conversational niceties.

French-dialect speakers in Luxemburg tend also to use Jovian loanwords. Jovian has traditionally been the common language that French and Luxemburgish speakers used to communicate with each other, although since 1900 Standard German has also filled this role.

The following chart lists several words in which Ill Bethisad Luxemburgish ("IB.Lux") differs from Luxemburgish in real life ("RL.Lux"). This list is incomplete.

* Used in addition to a native phrase or phrases

Unlike many of IB's European languages, Luxemburgish uses the same phonetic spelling as *here*, rather than an earlier etymological system. This is because no written form existed before the 19th century - there are no earlier spellings to draw from. Luxemburgish *there* takes the phonetic system a step farther, nativizing the spellings of most foreign loanwords (e.g. <vae> in Jovian becomes <väi>). 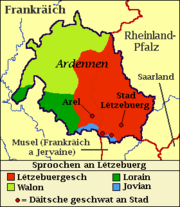 Luxemburgish is spoken in the orange region.

Luxemburgish differs from many other German dialects in that it has been standardized late for use in literature and administration. The standardization process began under the Napoleons and continued under Grand Duke Wëllem I, during which time the language flourished in literature and in the schools. It did not reach its final form until after the Second Great War, when a new dictionary was published and the language finally used for administration. Lëtzebuergesch is used for much of the business of goverment, and a few important documents are translated into the official languages of the Empire, Standard German and Latin.

Except for the many Jovian loanwords and phrases, Luxemburgish is almost 100% mutually intelligible with the Franconian German spoken across the border. Therefore, some rural Luxemburgers who may speak a form of Franconian rather than proper Luxemburgish are counted as Luxemburgish speakers. This is especially true in the northeast of the country.

Lëtzebuergesch is designated the national language, but it does not have sole status as the official language: the two minority French dialects, Walon and Lorain, are often used for official purposes such as civil courts and contracts within Luxemburg.

In Luxemburg, more so even than the rest of Germany, script choices are political. Jovian was the language of literature in early modern Luxemburg, and Jovian always uses Antiqua (Roman) typefaces. Napoleon's law code for Luxemburg was in Jovian, and the government primarily used Jovian and French throughout the first two-thirds of the 19th century. The nationalist movement that emerged mid-century embraced the local language, as well as the Fraktur typeface with its associations of Germany and pan-Germanism. Upon independence and re-admission to the Holy Roman Empire, Luxemburg's Diet mandated that the law code, translated into Luxemburgish years earlier, be reprinted in Fraktur to show the grand duchy's independence and Germanness. For nearly a century, Luxemburgish schools taught only Spitzschrift, the handwritten form of Fraktur.

After the Second Great War, the country took steps to dissociate itself from the Empire and its Prussian past. Liberal Luxemburgers sought to create ties with the West, seen as prosperous and progressive while Germany was stagnant. Antiqua letters were one way people could show their pro-Western sympathies.

The "script wars" of the 1950s and 60s were fought over a series of issues. The Diet had commissioned a new dictionary of the Luxemburgish language in order to fully make it the language of administration. As its work neared completion in 1956, a surprisingly emotional debate erupted over whether the dictionary, and by extension the official form of printed Luxemburgish, would use Antiqua or Fraktur. Conservative and pro-German Luxemburgers, who had been afraid to voice their views since the end of the war, insisted that Fraktur be used, as it had been for a hundred years. They were unsuccessful, and Luxemburg's government-produced print matter assumed a Roman face.

However, Spitzschrift was still taught in schools. A bill was introduced in 1958 to replace Spitzschrift with a Roman-based handwriting, for consistency's sake. This met with a much stronger opposition: either the pro-German wing of the country had become more organized, or a debate over schools roused more emotions than one over a dictionary, or else some combination of the two. Whatever the reason, the bill was defeated, and for a years political deadlock meant that Luxemburgers fluctuated between two scripts.

By 1965 Luxemburg's pro-Western stance had more or less become a fait accompli, signified by the government's overtures to Jervaine and Batavia, by the growing presence of Western companies in the country, and even by the grand duchess's marriage to Felip of Aragon. A second Handwriting Instruction Act was posed that year. It failed again - this time, however, by a quiet "no" vote, with very little public outcry. The march of Western modernism, apparently, would not be permitted to extend into Luxemburgers' handwriting. As a compromise, however, Antiqua-based was to be taught as part of Luxemburger children's mandatory Jovian lessons, as the proper form of handwritten Jovian. The modified Handwriting Instruction Act of 1965, therefore, confirmed Roman letters as the script for printed Luxemburgish, and Spitzschrift for Luxemburgish written by hand.

Luxemburgers educated since 1965 know how to read and write in both Antiqua and Fraktur, using the former for French and Jovian, the latter for the High German used to communicate with the rest of the Empire, and a strange blending of the two for their native dialect. Given those contraditions, in the private sector one's script choice remains a political act. Fraktur symbolizes one's belief in a strong Germany and Luxemburg's place in it, while Antiqua symbolizes one's association with the world of the West.