The Lusoamerican Union comprises those nations which were Portuguese colonies in the 16th century. The Union - a fellowship of political, cultural and economic coöperation - became formal in 1900. Member states are striving for a common currency.

The Union (also known as LAU, or more frequently as ULA from the Portuguese-language name União Lusoamericana) is composed of the following states:

The badge of the ULA - the constellation of the Southern Cross, or Cruzeiro do Sul - represents the member countries in their approximate geographical positions: 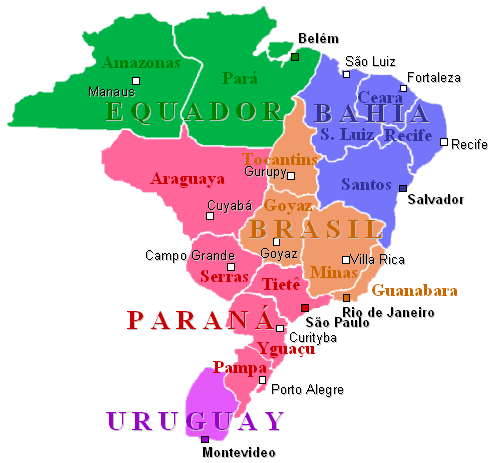 The Lusoamerican states have a complex political history. A brief overview follows:

Bahia and Brasil are parliamentary republics, Equador and Paraná are presidentialist republics, and Uruguay is an autonomous state of Riu de l'Argent. 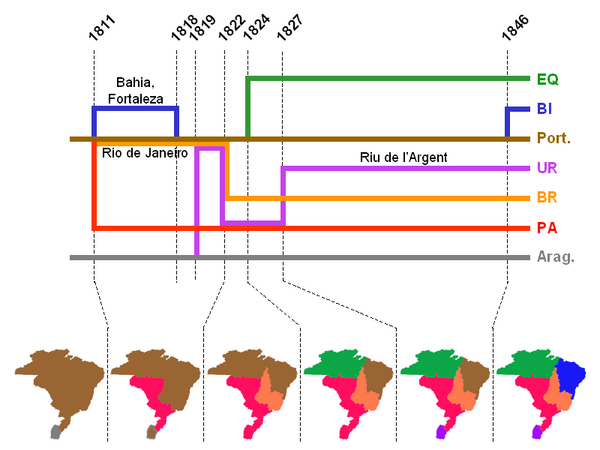 Tha member states of the Lusoamerican Union, except for Uruguai, share the Portuguese language. Spelling is more etymological than in Portugal and other lusophone countries; the ULA did not take part in the orthographic reform those states initiated in the 1950s. Thus we have Lusoamerican spellings like phthisica 'tuberculosis' (Port. tísica), triumpho 'triumph' (Port. triunfo) and annullar 'annul' (Port. anular). Unlike in all the other members, the Portuguese language is most emphatically not the language of the majority (which is by far and away Aragonese), but it a healthy minority language with a vibrant cultural life along with recognition and limited funding by the autonomous government in Monte Sant Olvidio.

Currencies in Bahia, Brasil, Equador and Paraná are related as follows, all based on a real worth 0.75 grana of silver:

The member states of the Lusoamerican Union have been planning a common currency since 1960 at least. Starting in 2005 a common monetary unit, the conto (¢) has been used by Bahia, Brasil, Equador and Paraná in international trade and exchange. Uruguai cannot follow as it is a part of the greater Riu d'Archent and as such uses the Argentian Reyal (₳), and then the national currencies may be abolished in favour of the single one, even for internal economic affairs. The conto has been defined as 2,400 réis (the real is common among the four countries). Equivalent rates in national denominations are: