Louisianne is a largely decentralized Representative Republic. There are three levels of government, The Council comprised of Prefects from each Prefecture and the Premier President who introduces and votes on national legislation and otherwise act as chief of government for their respective Prefecture, the Assemblée Nationale which serves as a ratifying body for legislation passed by the Council, but can also draft national legislation, pending approval from the Council. The Prefectoral and Départemental parliaments handle affairs closer to home.

Following the Summer Revolution of 1832, Armand Beauvais in the period now viewed as the New Beginning was elected to be the Prime Minister. As the Constitution was written at the time, it would have given Beauvais nearly despotic powers to rule, judge and control Louisianne. Unsettled by the precedent this would set, Beauvais in 1834 worked with the prefects of the three extant Prefectures, Dupré Rousseau of Saint-Onge, Daniel de Page of Saint-Louis and Aristide Thorez of the Osage Territory met in Baton Rouge to discuss a more equitable division of power. Fresh in their minds were the failed attempts of the French mainland to negotiate a new government, and they sought to use the good of the past without the taint of Bonapartism.

With very little lobbying a new form of government was passed, decentralizing the government to a more local and accessible level, and by 1836, the new forms were in place, with the Beauvais as First President and the other prefects, Rousseau, de Page, Thorez and Bernard DuBloix from the newly created Préfecture du Nord fleshing out the council.

The Council is presided over by the First President, popularly elected by the people of Louisianne. The Seven Presidents vote on legislation that is forwarded to them from the National Assembly, which is comprised of Senators elected by the prefectoral parliaments. A majority vote of the Council of 4 to 3 minimum is all that is required to pass a National Bill into law. It must be known, however, that most times of the year there is very little legislation passed directly by the Council. Most legislation takes place on the level of the Prefectures.

The Prefects and First President meet for three to six months in the Late Winter/Early Spring of the year to discuss, prepare and ratify national legislation. Otherwise, the Prefects are located in their prefectures and handle local events.

The Prefects are elected to an automatic term of seven years, each offset so that there is only one major election taking place each year, in theory. Each Prefect and the First President are subject to a vote of no-confidence. Prefects and the First-President elections occasionally require primaries. In the election of 2009 for the Prefecture of Saint-Louis, three candidates stood for election. This resulted in a split of the vote, 52%, 23%, and 23%. An emergency ruling of the Tribunal de la République announced that the two who tied would have to rerun a primary before the final election process in Messidor (late June). This law was later codified as stating that any two candidates garnering less than 35% in a primary of three or more must re-run the primary, provided that there is one candidate who garnered more than 35%. If any of the three (or more) candidates failed to gain a substantial minority (greater than 10% of votes) they were culled from the Primary.

Should the First President die, be incapacitated, or resign from office, a popular election is held to immediately fill the remainder of the term. By precedent those who run for the position already hold a seat upon the Council.

Although the government is decentralized, it is established in such a way as to allow sweeping legislation from The Council to be passed to the nation at large, with a 2/3 majority of all parliamental representatives consent. The need for this has proven heretofore rare, however, it is not an uncommon occurrence once a decade.

Graphic showing the current alignment of the Council.

The council is currently composed of 4 representatives from the Républicains Libres, 1 from the Luthériens Democratiques Populaires, and 2 from the Loi Naturelle. They are as follows:

Because of the current makeup of the Council, the Républicains Libres have an tenuous majority, with 3 seats, 4 including Mme. Claintaun often voting in agreement with the R.L. block. Mme. Claintaun is likely to play more of a swing vote until the next prefectoral election, with M. Norbin, and Mmes. Landrieu and Miquasquille forming a 3-seat Loi Naturelle bloc. However, with Mme. Miquasquille's centrist leanings, a new balance may be struck in the national legislation.

Because of the oligarchic nature of the Louisiannan government, elections for each Prefecture are held once every seven years, with one election each year, and on the seventh year, elections for the First-President are held.

The rotation is as follows. Election years are listed after each in italics.

The populace votes for local representatives who serve in the People's Houses of the Département and the Préfecture. A second house in each prefectures is the House of Lords, composed mostly of those granted political appointment by ancestral nobility, or, more and more frequently, a political appointment by the prefectoral Prefet, or Prefect which is approved by the People's House.

Together these Houses elect the Prefect who is the executive leader of the prefectures, subject to a vote-of-no-confidence. The Prefect represents his or her respective prefectures on a national level in the Council.

Created by Beauvais and his cadre of leaders, the National Assembly is elected by representative districts in the Prefectures and Departments, consisting of a static number of 449 seats, and are re-appropriated by population each 10 years, following the national census. 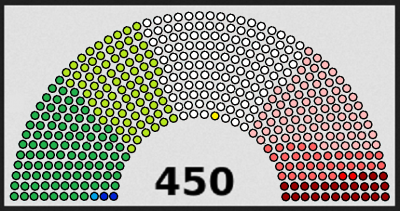 The following legend could help:

The yellow seat is the observer seat for the Pays-Lointains. Legislation was presented to committee in 2014 to allow this observer seat to become a fully-fledged voting member of the National Assembly.