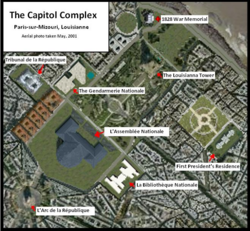 Aerial shot of the Capitol Complex on the banks of the Mizouri.

The Louisiannan Capitol Complex is the heart of the government of Louisianne. With announcement of the creation of the Zone Capitale in 1840, a grand concours was held where established architects the world over were invited to compete to design the centrepieces of the national capital. In the course of the competition a number of architects rose to the fore, notably Robert Mills and Henri Labrouste.

Mills was trained by James Hoban, and used some of his architectural styles to design the First-Presidential residence. Hoban was trained by famed Pierre Charles l'Enfant, and some of his designs were incorporated into the layout of the Capital City.

As Paris-sur-Mizouri grew beyond the central collection of government buildings Frédéric Loi Olmstead was commissioned to expand the designs proposed by Mills for the city grid. True to the Gaulish nature, however, the city grid tends to remain focused on the main thoroughfares and not to the individual streets. 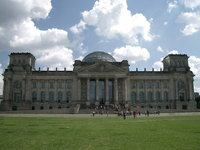 A picture of the Supreme Court on a trial day

Labrouste was chosen to build and design the Tribunal de la République, or the Supreme Court of Louisianne as it has come to be known colloquially. The Tribunal is only in session during the summer and winter months. During the Spring and Fall the court is closed to the public, preparing for the next three month session.

The Tribunal de la République serves both as a Court of Last Resort and a Constitutional Council. Each session is typically divided between the two roles, however it has happened frequently in the past that one session of the year will be devoted to exclusively one role and the second session the opposite. The cases for the Court of Last Resort are decided by the Justices. The Constitutional questions are decided by vote of the legislature.

In an extrapolation and simplification of his usual stylings, Labrouste created his design for the Louisiannan National Assembly building. Labrouste's design for the National Assembly was well accepted from its original construction. The Assembly building was the site of the assassination of Joseph Smith, Jr. and his brother Hyrum. As Louisianne's population has grown since its construction, it has been expanded, however the architects have been carefully selected, maintaining the stylings and appearance of the building.

The wings of the assembly building serve as offices for the members of parliament as well as council chambers for the special committees. The Central rotunda, which is situated behind the main hallway connecting the wings, is reserved for the National Assembly, with an additional room for the members of the National Council to meet and review the legislation passed by the Assembly.

One of Armand Beauvais's greatest legacies is the Bibliothéque Nationale. However, this legacy was only realized in the last fifty years. In An CLIV (1954) the original plans designed by Labrouste were uncovered in the vaults of the National Assembly. Within 10 years funding was secured and the initial construction of the library was completed. Subsequent projects were completed in 1976 and 1989, the 200th anniversary of the Revolution.

In the fifty years since the Bibliothéque Nationale was revived, librarians have been securing any and all documents of historical value to Louisianne, as well as promoting an increased intellectual environment in Louisianne.

Gustave Eiffel was commissioned by the Louisiannan government to construct the same tower that he had built in Paris, France at the river-side. The site was moved from adjacent the river with fears of flooding, to the rise of the bluff overlooking the river. Construction was completed shortly before 1900. Prior to 2001, the Louisianna Tower was painted in "Louisiannan Blue," but a paint error caused it to be painted Eiffel Brown, and it was this color for several years, painted Louisiannan Blue again at the end of 2008.

The Gendarmerie Nationale is the newest addition to the complex, forming a triangle between the National Assembly and the Tribunal de la République.

James Renwick, Jr. was hired by the Latin-Rite Catholic Church of Louisianne to build the Church of Les Minimes, adjacent to the Champs des Sans-Culottides.