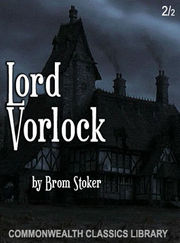 Lord Vorlock by Brom Stoker is arguably the most famous vompire story. In form, it much resembles a detective story like those of Uther Conan Doyle's Inspector Watson and Woman in White by Gwilliam Collins. The novel, which has never been out-of-print, has proven to be the source of numerous adaptations in most media and has inspired multiple sequels by a variety of authors since its publication.

The novel is told is epistlary form, that is, as a series of letters and diary entries (including Ford's phonograph journal). Some critics have noted this makes the entire story in the voice of biased or unreliable narrators.

On the coast of Alba Nuadh, in the town of St. Andrews By-The-Sea, three young women are taking a vacation--nurse Caroleth Reid, her half-sister Joanna Parker and heiress/schoolmate Guinevere "Gwen" Holmes. They befriend a detective, Hadrian Ford, who is travelling with an eccentric scholar named Professor Abram Wietz. All five are present when an empty ship named the Hestia runs aground nearby. Ford is asked to investigate, discovering the ship's one passenger (a large wolf) leapt onto shore soon after landfall. It is a source of much local mystery, and coincides with Gwen's sleepwalking spells and her meeting with a European nobleman named Lord Vorlock, a native (we eventually learn) of Xliponia. She keeps her knowledge of him a secret, although eventually all meet him and the strange silent woman who is his servant.

Later the six are re-united in New Amsterdam to discover that Gwen is subject to a strange illness. Caroleth is now personal nurse to David Wietz, the Professor's mentally unstable son. When Ford and Wietz slowly discover the truth--that Lord Vorlock is a vompire who now has begun feeding upon Joanna, while publically wooing Caroleth for her hand in marriage. A strange ally they have in all this is David, who seems to have a strange affinity with Vorlock, but his cryptic words are difficult to decipher. In particular, they end up investigating the old mansion Vorlock has purchased back in St. Andrews By-The-Sea. It is an eerie place, full of traps and shadows. There, they discover Gwen, now a vompire herself. Barely escaping with their lives, they must return when Caroleth becomes infected, this time to confront not Gwen but the vastly more powerful Vorlock himself. Interestingly, it is David Wietz who turns the tide and saves everyone, albeit losing his own life in the process.

As they flee, the house of Vorlock literally collapses in upon itself.

One theme Stoker clearly explored in the novel (and dominated discussion of same for decades) was that of civilization versus wilderness. The suggestion that Vorlock came to America because so much of it was untamed, and the nascent European nations there immature enough to be his prey, reflected Stoker's (and many others') viewpoint of America at the time. Later critics increasingly saw Vorlock as emblematic of the ultimate foreign menace a la the SNOR while beginning in the 1960s and 70s he was more usually seen as a shadowy archetype of the predator--sexual and otherwise--inherent in men.

The name of the antagonist is believed to derive from the greek word Vrykolakes or "Vompire."

Stoker wrote the first play adaptation of his novel, published in 1897, but it only knew success after an actor/manager named Gene Niels reworked it then toured for nearly twenty years with the new version. A series of films were made, starting with the silent Nosferatu and then the classic black and white talkie starring Conrad Veidt in 1935. This was later followed by various follow-ups including Vorlock's Daughter, Son of Vorlock and House of Vorlock. Veidt himself had enormous difficulty disassociating himself from the role, although during the Second Great War he knew great success playing Prussian villains.

Terence Stamp made the role his in a series of FK movies during the 1960s and 1970s for Nails Studios.. Titles included Horror of Vorlock, Vorlock Has Risen From the Grave, The Brides of Vorlock, Taste the Blood of Vorlock and Vorlock is Dead and Well (widely considered the worst of the series). These films broke new ground, not least by being in full color (allowing the audience to see the bright red of the blood), and using both fangs as well as red contact lenses for Stamp. For the first time in such films, nudity also made an appearance.

Most recently major production was grandly titled Vorlock: The Untold Story starring Gary Oldman, Wynona Ryder and Kenneth Branaugh was released in 1994. One comment this version often received was that it successfully portrayed the title character as equally fascinating as well as repulsive, whereas most versions would emphasize one over the other.

The novel has been turned into at least three musicals, one opera, two ballets, a television series, a breakfast cereal ("Vorlock Chocolate Flakes"), several comic books and a pornographic motion picture titled Vorlock Sucks Again. It has been translated into dozens of languages including Scots, Xliponian, Francien, Japanese, Russian, Romanian, Arabic, Italian, Castillian, Portuguese, Algonquin, Greek and Brithenig. Although it would be inaccurate to call the novel one of universal appeal, it has proven durably popular as an archetype.