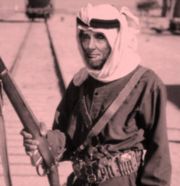 Llawrent during the Arab Rebellion of 1916-18

Tomos Edwardd Llawrent was born on 16 August 1888 in a farm near Sewnt, province of Gwenedd, Kemr. His family made its fortune exporting wool to France and Llawrent soon learned the Francien language from visitors.

His father, Tomos Rhoberth Llawrent, sent him to the Allt Yscol per Mab (High School for Boys) in Esca in 1900 where he made many friends among the local Kemrese Muslims and became interested in their culture. Later, in 1907, Llawrent was admitted to the Faculty of History of Castreleon Universtity. During the summers of 1907 and 1908, he toured Iberia by train, horse and even walking, collecting photographs and drawings of the Muslim monumental heritage.

Subsequently, in 1909 he disguised himself as a Kemrese Muslim and forged documents in order to visit Mecca during the Hajj, at the time forbidden to non-Muslim people. He was one of the first non-Muslim Europeans to visit Mecca. He easily learned Arabic and acquired a great deal of knowledge about the natives’ costumes.

Llawrent graduated in 1910 with high marks after submitting a thesis called Lla beleirindad foslemuis dreddidiwnal e llo sew chomyd cu llo sefid chomergial in ill Llewent Medd (The Traditional Muslim Pilgrimage and Its Connections with the Trade Routes in the Middle East). The thesis was based on his own field research in Iberia and the Middle East.

Between 1911 and 1914 he travelled often to the Middle East visiting present-day Lebanon, Judea, Egypt and Syria in order to do post graduate work on the Crusades. His extensive travels through the Levant; his excursions, often on foot or camel; his living with the Arabs, and wearing their clothes, learning their culture, language and local dialects, were to prove invaluable in the coming war.

In August 1914, the First Great War started. Llawrent did not immediately enlist as he was by then in Judea, an Ottoman territory. He crossed the border into Egypt afraid that the Ottoman authorities would arrest him. Then he returned to Kemr to be enlisted in the Kemrese army.

His intimate knowledge of the Arabs assured him of an assignment in Cairo to protect the Kemrese Consulate. Kemrese military intelligence finally understood his importance and sent him, in 1916, to Hijaaz to report on the Arab Rebellion against the Ottomans.

Llawrent became the ideal liaison between Allied and Arab forces and he fought together with the rebels in Levant and Arabia under the command of Faisal bin Hussayn, the future King Faisal I of Hijaaz and Iraaq. Their extensive guerrilla actions against the better armed Ottomans were successful. The Ottomans were expelled from Damascus, Syria, the present-day Bedouin Free State, and later from Hijaaz which declared its independence in 1918 with Faisal as king.

Llawrent became a close friend to King Faisal I who gave him command of an irregular army. This army became well known for its daring attacks against the Ottomans and earned Llawrent much respect among the Arabs. He tried to convince Faisal to form an alliance with the rival Saudi and Rashidi royal families against the Ottomans, but was not successful.

Thanks to his successes, Llawrent was promoted to major in 1917, and to lieutenant colonel one year later. He was also highly decorated by King Gereint XII himself and, by the end of the war, he was one the most popular living Kemrese, known now by his nickname, Llawrent di Arabia.

With the end of the war, Llawrent returned to Kemr, where he was received as a war hero, but in 1919 he returned to Egypt, once again to provide protection of the Kemrese Consulate in Cairo. During this time he published his university thesis as a book (1919). He had intended to publish another book, Llo cholôn seth di'll doethfent (The Seven Pillars of Wisdom), but the manuscript was lost, together with his luggage, during a trip between Cairo and Alexandria. He stayed in Cairo two years until King Faisal I asked for his help.

Faisal received the State of Iraaq from the League of Nations in 1921. This territory needed to be pacified. Llawrent left his position in Cairo and went to help his friend. This was considered desertion by the Kemrese military authorities who tried he in absentia but giving him a lower penalty thanks to pressures from the press and from public opinion.

Llawrent arrived Iraaq in November 1921. The king made him a general and gave him an army to fight the Iraaqi rebels. During the next six years he fought those rebels until Iraaq was finally pacified after Faisal I bought the rebel leaders’ loyalty by giving them oil concessions in 1927.

In Iraaq many members of the Hashemite royal family were annoyed with the fact that Llawrent was a foreigner and a Christian. He decided in 1928 to renounce Kemrese citizenship and the Christian religion. He changed his name to Hassan al-Aurens, received Iraaqi citizenship, embraced the Sunni Islam religion and married an Arab woman with whom he had two children. Even so some Hashemites and pro-Hashemite members still considered him a foreigner and disliked him for that.

King Faisal died in 1933 and was succeeded by his son, Ghazi. King Ghazi I disliked FK influence over Iraaq and did not trust Llawrent for that. In that year the new king relieved him of his military command.

Llawrent, or Hassan al-Aurens, settled in Al-Basra and dedicated himself to his new import-export business. But his business capabilities were not as impressive as his military ones. Things became worst when he had a serious motorcycle accident on 19 May 1935. He almost died and lost half of his left leg. Since then, the once athletic Llawrent became a fat man because of lack of exercise.

To make himself rich Llawrent conceived a plan. He knew the European nations were now interested in oil production. While the FK had their concessions in Iraaq and in their Arabian Gulf protectorates, France still needed to find its oil source. He also knew that Europeans had not much knowledge at that ime about inner Arabia which was still a rather mysterious land.

He went to France in 1937 disguised as Emir Saud bin Omar al-Sadr. His country, Qawi, supposedly located somewhere between Iraaq and Saudi Arabia, was meant to be an unexplored oilfield. The false emir opened an embassy in Paris, under a Hashemite-inspired flag, and looked for investors to start oil production.

French high society welcomed the colorful figure of the emir and his companions and they received many invitations from businessmen and even state dignitaries. He enhanced his charm by telling about his exotic and promising country, as well as by embellishing his role in the battles against the Ottomans.

Llawrent enhanced his popularity with elaborate banquets at the embassy and invited dignitaries like foreign ambassadors, government ministers and senior military officers. He became even better known thanks to interviews given to the Courier de la Matin and Le Monde Illustré newspapers. He was also interviewed by the Kemrese newspaper Lla Nediwn Ghemruis but his appearance had changed so much that the journalist was not able to recognize the one who once was a Kemrese national hero.

On 23 October 1937 Llawrent requested from the Credit Parisien a loan of 200,000 livres in the name of government of the Emirate of Qawi. In that year he published in secret a book entitled Description of Arabia, including the surroundings of the Emirate of Qawi, supposedly written by a certain English Colonel John Morris. It described the fictional emirate in glowing terms and mainly concentrated on how shallow the oil was located. Qawi was said to be a peaceful and ordered country connected by railway to Al-Basra.

The Compagnie Franco-Arabe de Pétroles, present-day Pétrole Français, decided to invest but wanted to see with their own eyes the emirate. Llawrent returned to the “emirate” with members of the French company to study the terrain. After arriving in Al-Basra they were sent to an oasis in south Iraaq. Llawrent provided translators and the French were amazed when they saw locals digging oil which could be found a few feet below the ground. In fact, the oil was inside buried tanks.

Emir Saud al-Sadr and the Compagnie Franco-Arabe de Pétroles signed a million livre contract in March 1938 and in the next month the first workers were ready to be sent. As the emirate did not yet have banks the workers exchanged French livres for Qawi rials at a 75 sous exchanging rate. This bogus currency had been printed a few months before in south France at a small printing facility bought with part of the loan requested from the Credit Parisien.

In May 1938 the workers from the Compagnie Franco-Arabe de Pétroles arrived in Al-Basra. They soon understood that they had been cheated when they discovered that no one there ever heard about the Emirate of Qawi. A telegram was sent from Iraaq to France explaining the situation but it was too late. When the police arrived at the embassy in Paris, they found it completely empty and without any trace of the alleged emir and his companions.

By then Llawrent already had returned to Iraaq leaving behind debts of over one million livres, the Compagnie Franco-Arabe de Pétroles in economical trouble, and French public opinion feeling it had been cheated.

In 1939, King Ghazi I died and was succeeded by his four-year-old son Faisal under the regency of Ibrahim bin Hussayn. The regent restored Llawrent’s military position as general but Llawrent did not participate in the following mass persecutions against opponents.

Llawrent lived in low profile during the next years, enjoying his wealth. During the 1950s investigations made by French journalists proved he was the alleged Emir Saud al-Sadr and French justice asked Iraaq for his extradition, but this never happened.

With the fall of the Hashemite rule over Iraaq in 1958, Llawrent and his Arab family went to Hijaaz, where he was made a military advisor to King Hussayn I.

He died on 4 December 1970 in Mecca. He was given state honors at his funeral with highest praise from the royal family.

He has been portrayed twice in the cinema:

The manuscript of Llawrent’s lost book, The Seven Pillars of Wisdom, was found in Egypt in 1979. It remained unpublished in the private collection of a wealthy Egyptian until in 1987 he sold it to the Kemrese State. It was finally published in the next year to celebrate the 100th anniversary of his birth under the name Llawrent di Arabia. However in Arab countries it was published under the name Hassan al-Aurens.

This book is the autobiographical account of Llawrent’s experiences during the First Great War. It became an important source for an understanding of the historical events in Arabia during the Arab Rebellion. However, some criticize its partiality and the way in which Llawrent seemed to have exaggerated his (and Faisal’s) actions.

Llawrent di Arabia remains a controversial figure today. Among the Arabs he is seen as a hero and an adopted son of the Arab nation. However, in Kemr people seem to be rather divided about him. Some consider him a war hero while others see him as a fraudster. Many historians today argue that in fact both are right.