Licence Plates of the World

Since 1949, new plate was introduced with white background and black characters. It contains on the utmost left side the small CoA of the kingdom, then two letter code of town (e.g. PR - Prague) + one letter and six digits for ordinal number of the plate. On the utmost right side, there is a CoA of the federal country. In-between the letters and digits, there are marks of licence registration (red) and technical control (green). The diplomatic cars have the plate with blue background and yellow numbers, army white and green, police yellow and black.

Current Iraaqi license plates consist of, from the left, an Arabic code number of the governorate, the national coat of arms, and six Arabic numerals. Underneath, the word "Iraaq" in Arabic is written. The numbers are usually white but the backgrounds differ according to the type of use of the vehicle.

Nassian licence plates before 1952 where quite simple, a white rectangle with black characters, with a letter code of county (e.g., S - Setikortu) and digits for an ordinal number of registration, separated by a dot. Because there were not many cars in Nassland, this arrangement was fine for quite a long time.

After the political changes in 1952, the design of the plate was changed too. Now it is almost square, with two lines. The upper line contains the Nassian national symbol of three blue circles, a yellow mark for technical control and a numerical code of the county (e.g., 100 for Setikortu). The lower line contains two pairs of letters separated by a dash as a code for the ordinal number of registration. The county code is replaced by letters when the vehicle belongs to the government (NAS), the armed forces (PP), security forces (O), diplomatic staff (DP) or emergency vehicles (rescue squad, ambulance, fire brigade) (X).

A typical American motorcar tag is 18 inches by 6 inches. This one, from Ter Mair, shows the typical layout used on tags between 1997 and 2006: the province's symbol at the far left is followed by the county code, in this case MM stands for Montgomery; then a prefix that designates what kind of vehicle the tag is attached to; in the middle is the unique five digit sequence that identifies the vehicle's owner. At the far right is a space for any applicable registration plates, which are small metal plates that are screwed on to the car tag. Black on white with flat lettering has been used since 1983; previously, white raised lettering on blue and raised white lettering on red have been used. In the early xx century, flat white letters on various colours were used to indicate vehicle type.

Each province determines the overall dimensions and shape of their motorcar tags, plus colour schemes, raised or flat lettering, reflective or matte paint and available options such as special anniversary or event tags. Most provinces adhere to the 18x6 size, while a few, notably the Floridas and regions within the Unincorporated Territories use different sizes. The Floridas each use 10x9 tags (the same size found on old Florida-Caribbea car tags), while the UT's tags vary from 10x5 to 15x5, several regions have also produced animal shaped tags, usually beavers or bears.

Regardless of size or shape of the actual tag, local service stations and motorcar dealerships offer metal jigs that will securely hold any tag onto the standard bracket provided by the manufacturer or importer. The bracket generally consists of a single strip of sheetmetal with long slots to which a local jig containing a motorcar tag can be bolted into place. Since the earliest days, the jig has been used to advertise dealerships, petrol stations, tourist attractions, etc.

The licence plates of the Intendancy come in one single model with some distinction made for special vehicles (taxi, maréchaussée, etc...) by the use of a letter prefix followed only by numbers.

Licence must be registered every year, proof of which is indicated by a small sticker applied below the fleur-de-lys.

Before 2001, licence plates in the RTC consisted of three letters and four digits, separated from each other by two crowns. The first two letters represented the prowięcza the car owner was registered. This licence plate was black (dark blue, according to some), with while letters and numbers.

In 2001, a new system was adopted. This system gives information not only about the prowięcza, but also about the municipality where a car owner resides. The licence place is white with a red border. The first two or three letters are in red; the first represents the prowięcza, the second and third the municipality. After that, there are the same two crowns, followed by four or five digits, a dash and a letter, all in black.

In addition to the licence plate, most cars also have an oval stickers next to it. Nowadays most cars have RDK on it, some cars use W (for Veneda) or LT (for Lithuania). Some cars have both.

Licence plates for Turkestan are black with a blue border. They show seven white numerical digits in two groups - a group of three and a group of four, separated by the ubiquitous golden sun emblem.

The first digit represents the Province in which the vehicle was purchased and registered, and the second and third represent the aymaq in which it was registered.

The six provinces are numbered as follows:

Licence plates are generally kept for the lifetime of the car, and do not need to be periodically changed as in some countries.

Vehicles registered to the government bear red licence plates instead of black. Foreign diplomatic vehicles bear yellow licence plates with black lettering, and a single 4- or 5-digit number in which the first 2 or 3 digits identify the country in question. 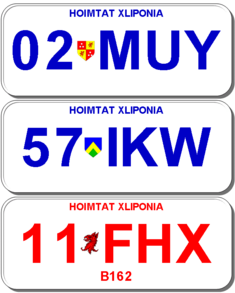 Licence plates for Xliponian cars are white and bear a combination of two digits and three letters. The first digit indicates the province according to the postal code. Letters and digits are blue, except for cars belonging to the State and public institutions, whose characters are red (and may bear additional identification).

Between the digits and the letters is the provincial coat of arms, except in the case of official vehicles, which show the Royal Badge.