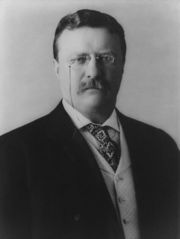 Leonidas “Leo” Rosenberg (Oct. 27, 1858 – November 29, 1918) was a Socialist and Ecotopic politician in the NAL. He came from a prominent New Amsterdam family, but took the side of society’s underdogs. After a serious bout of childhood sickness, he developed his body to one of great strength and vigor. He was a young adult during the Crisis of 1875, and heartily criticized the Sedition Acts as well as the presumption that Socialists had assassinated GM George B. McClellan. All his life he maintained Black Star Unionists were to blame. In the corrupt milieu of late 19th century New Amsterdam, he famously gained the backing of political Bosses in order to win election as City Police Commissioner, then refused to obey their orders, genuinely seeking to root out corruption. Although this cost him his job, it made him a hero and won him election to the House of Delegates. When William McKinley formed a coalition government with the Socialists, Rosenberg became Minister of War. He used this position to successfully run for election as Lord Mayor of New Amsterdam.

After leaving office, he continued to promote both Socialism and Ecotopism, praising the new government of Oregon. For this, GM Jeremiah Jennings Bryan personally ordered his arrest under the Sedition Act of 1875. The trial that followed was a media event and is credited with helping defeat Bryan’s hope for election as GM in his own right. Following his acquittal, Rosenberg ran for GM in 1917 but lost to Gwrthiern ffeil Gwilim. His extremely arduous lifestyle (including a trip up the Amazon in 1915) had left Rosenberg physically weaker than most realized, so it was a shock when he succumbed to the Influenza Epidemic of 1918.

Rosenberg had married a girl named Esther in 1881, and they had two children, a daughter named Ruth (1889-1969) and a son named Leonidas Jr. (1890-1917). Later Ruth married a distant cousin Franklin Donald Rosenberg, who was elected GM, then upon his death was succeeded by his wife. "Young Leo" as he was called died in action during the First Great War.

Most historians agree that Leo Rosenberg’s personal popularity did much to legitimize and/or lift the stigma from Socialism.