In 1721, Russia defeated the combined armies of Sweden and Nassland and annexed approximately one sixth of Nassian territory on the south of Lake Ladoga and the south-east of Lake Onega.

As the new SNOR regime get stronger, foreign policy against Nassland urged to create a quasi-independent satelite state - Ladozhiska Respubelika (Ladogian Republic, LR) with its capital at Kargopol (Kärikköpölü). In was established to intesify the pressure on the Nassian State. The state was "ruled" by a radical junta, a SNOR clone-party Sovebodena Ladoga (Free Ladoga). This party was in close contact with already existing pro-Russian party Ladoga, established early 1920 by White agents. 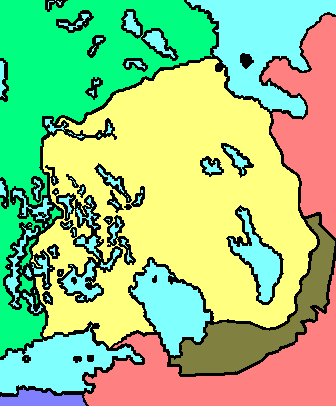 LR was meant to be a thorn in the Nassian side, a Russian horn blowing propaganda to NV. It was a totally un-self-sufficient organism, fully dependent, economically and politically, on Russia. LR hosted a large contingent of the Russian Army, and was tightly closed by border guards.

The Lipov-von Korff treaty left Nassland in the Russian sphere of influence. The Ice War started in 1939 after provocation between NV and LR; Russian soldiers in a fake attack seized a propagandistic radio transmitter in a border village near Pudozh (Puttokku), killed all staff, then "liberated" it again, showing the corpses of aggressors in Nassian uniforms. LR officially declared war on NV and urged Russia for protection. In April 1940, the Nassians were defeated. Solveneska Respubelika Nasina (Slavonic Republic of Nassland, SRN) was created after coup d'etat in NV and its merge with LR. The original Sovebodena Ladoga of LR was transformed into Solveneska Iznovorodena Setarna (SIS) and was put in charge of SRN.

During the popular uprising in 1948, Nassian partisans never reached that far and territory of former LR was during the Yalta and Visby conference still under Russian control. On these meetings was decided to restore NV without LR, which was brought back to Russia. Any autonomy was abolished and territory became integral.

As the Republic of Petrograd and Novgorod (RPN) was created after the fall of SNOR in 1990, the irredentistic party Söveppöttätä Nevö-Enisäpör (Freedom for Ladoga-Onega) started to warm up Nassian nationalism there. "Nassian" was recognised as a nationality in RPN in 1992 only (until then they were called Ladogians). Shortly thereafter, Ladozhsko-Onezhskaja Avtonomnaja Oblast' (Ladogo-Onegian Autonomous Region) was established on the territories populated by Nassian majority and elsewhere after plebiscite.

Some Nassians in RPN attempt to be repatriated to NV, some are getting into RPN administration and business. NV needs to deal today with an invasion of beggars, who see life standards in NV and think that "grilled chickens fly directly into the mouth there". Contemporary vice-president of the RPN Svetmir Arkadik Bukolesov is of Nassian nationality.