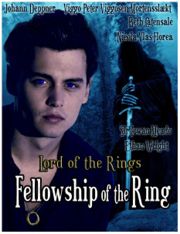 One of many posters for the first film

(Atlanta, Jacobia, NAL) - Amid great fanfare, executives at Metropolitan Moving Pictures announced that director Hadrian Voermann has been giving the go-ahead to make two motion pictures based on the classic fantasy novel "The Lord of the Rings" by Sir John R.R.Tolkien.

Voermann is a veteran filmmaker who once before attempted to make a big-budget fantasy epic, titled "Mythos" but which never left the development stage. His previous movies include a wide range of hits and misses, including the science fiction "Glaive Runner," the explicit noir thriller "Instincts Basic," the feminist road picture "Louise and Thelma" and the almost hallucinatory "The Sapphire Forest." He has also adapted novels to screen before, most famously "Lotilda" based on the scandalous work by Vlad Nabokhev. His most recent film was "Not Faithful," a drama about adultery.

According to studio spokesmen, the preproduction of "Fellowship of the Ring" has already commenced, with casting expected to be finished within the next three months. Filming is scheduled to begin this summer on location in Oregon. (this report from the National News Corporation)

Rumors abound about the casting the upcoming two-pic epic of Lord of the Rings (generally referred to as LOTR: THE MOVIE).

Three parts in particular, sources are confident, have already been cast:

From the February 2006 edition of Dandy Magazine. (This is an interview between best-selling novelist V.A.Howard and Hadrian Voermann, noted film director currently at the helm of the new motion picture adaptation of LORD OF THE RINGS.)

VH: We meet at last!
HV: At last, yes. You know, I was actually up for directing one of your novels. Pushed hard for it, as a matter of fact.

VH: Oh? Which one?
HV: “Wingless Angels” the one about the castrati singers.

VH: What happened?
HV: Damned if I know. Studio politics maybe. Something. (shrugs) Water under the bridge.

VH: And now you’re going to do “Lord of the Rings.”
HV: Yeah. That should get me burned in effigy. I hope so, anyway.

VH: You hope so?
HV: If people don’t care about what you’re doing, if they don’t get riled up, what’s the point? Don’t know about you but I could just as easily be selling real estate and commodities or be a really top-notch dentist somewhere.

VH: I’m fantasized about being a therapist.
HV: There you are, then. But you’re an artist instead.

VH: That is what engaged my thoughts and heart.
HV: Exactly. Exactly. And when you’re doing that, you reach out to people. But you don’t want them to just pat you on the head and say “good boy, here’s a cookie.”

VH: I quite like cookies.
HV: (laughs) So do I. But I’m a grown up, or so they say. I can go out and buy me own cookies. What I want from others, what I’m trying to get from them in my movies, I want them to react. To get stirred up.

VH: To be changed.
HV: The name of the game, after all. You stand still long enough, you die.

VH: So—and this has got to be occurring to every single Tolkien fan reading this—are you planning on deliberately upsetting loyal readers of these books? Because that is something of the impression I’m getting.
HV: Not deliberately. I’m not going in to work each day saying to meself “Oh, how can I stick it to those Tolkien people this morning” nothing like that. But…there’s no real way to do the books justice without upsetting some fans. Not all. But some. The books are too big, for one thing. Way too big. It’d be like climbing Mount Everest naked to try and make this as trilogy and I’m not making a trilogy. The studio won’t go for it. We’re making two movies. Not three. And that means cuts.

VH: Are you?
HV: About that, definitely. But there’s no room. I’ve got maybe six hours to fill up and there’s just not enough in that whole bit to justify keeping it there. Gotta go. You see…well, you probably already know…a book and movie are just very different things. You can set your own pace with a book. John might read “Lord of the Rings” in a couple of weeks. His twin brother might take a year. And they both might like the book exactly as much. Or as little. The point is, they set the pace. Not with movies. With movies, I set the pace. And I have to keep in mind you can only sit down so long without needing to go to the toilet.

VH: But you can’t take the movie with you.
HV: No you can’t! So you’ve got to streamline things. Got to. Some characters have to go. Others are combined. The beats and rhythms of the story need to be worked out all over again.

VH: Okay. We can hope! But I’ll bet any amount of money that what readers really want to know are specifics. What specific changes are you making for the films?
HV: (pause) They’re not all worked out yet.

VH: (laughing) How very coy!
HV: No, really, the whole process… (pause) We’re cutting one of the Fellowship. I am. I’m omitting a character who is, in the book, an actual member of the Fellowship. Gone. No longer there. And one of the really major locations that everyone talks about is also gone. Cut.

VH: I can hear maybe a mob putting together that figure in effigy even now.
HV: Good. Actually, I feel like this enormous tease telling you that. Truth to tell, I don’t think the professor…Sir John I should say…would be at all pleased. He’d very likely be quite unhappy with me. Quite, quite unhappy. Which is too bad but I’m the one in charge so I’ve got to do what I think works best for the film and story. He wrote the book. I’m not touching that. It exists and nothing any of us can do can whittle away one atom of what the book is, which is brilliant. But the movie has to stand on its own. It can’t depend on anyone having read the book. Should that happen, the movie is a failure.

VH: Makes sense.
HV: Glad you think so. Would you mind telling the hordes of Tolkien fans that.

VH: I don’t think it’ll do any good.
HV: Probably not.

VH: So when you say someone in the Fellowship has been cut…
HV: Replaced, really. With another character who needed to be more central to the action. (pause)

VH: Are you going to say any more?
HV: Not about that. (laughs)

VH: Rivendell! Wow.
HV: That was actually an easy choice to make. Given that we have only two films, then we needed to streamline as much as we could. One of those streamlinings was the glimpses we see of peoples and races who don’t really take that much part in the main story. Specifically, the elves.

VH: But they’re vital!
HV: Yes. But they don’t do much. Most of their important bits happened before this story even begins. So rather than take this thematic detour…no, not detour. More like an oasis. Rather than visit two more-or-less same oases in the tension-filled landscape that is Middle Earth, our film…my film…has the Fellowship only visit one Elvish land. In this case, Lothlorien. I had to cut one of them, and frankly Rivendell seemed the less exotic. The less meaningful in terms of what the story is all about.

VH: So you’re doing away with the Council of Elrond?
HV: No, no. Not at all. Relocating it.

VH: Into Lothlorien?
HV: Pretty much.

VH: So what other changes have you decided upon?
HV: Decided upon? Nothing major. Not yet. A lot of things are still getting worked out with the studio, because they have to pay for it after all. My own view is that you’ve the material, right? But it has to be changed just because a book isn’t a film. So those are the changes you have to make. Then you’ve got the changes you’re really forced into but would rather not do. I mean, you can’t afford to hire ten thousand extras and make them all up like goblins. Or put suits of armor on them. Just not possible. So we do tricks and things to get around that. But that’s also where you get into negotiations with the money people. Some things—details really—would end up costing a fair amount. So, understandably, they’d like to see as many as feasible of the pricey details go bye. Me, I’d like to keep them all. So we go back and forth. Well, for example—stock footage. Studios love stock footage. You can see why. I don’t want to use any. But if I do, it’ll save thousands and thousand of pounds and the money people like hearing that. So one of my jobs is to go through the stuff that hasn’t been used much, or sometimes at all. Any footage like that I can use, I will. And that way, the studio lets me budget pointed ears for the elves and hobbits. Stuff like that.

VH; Since you’ve started on the business side of the production.
HV: (laughs) For my sins.

VH: (laughs) Why are you filming in Oregon? That’s one of the first questions that came to my mind when news of the movies came up.
HV: There wasn’t anything preordained about that. It was just logistics. You need lots of open area, woodlands and plains and mountains, right? And you need it out of sight, or enough out of sight, of any signs of human habitation. So Europe is right out from day one. So is a lot of America, to be honest. Now there are places that’d be great. The Ukraine, for one. But everyone would rather film somewhere a bit more stable politically. I’ve been to Aotearoa and let me say that would have been great. But its something like ten thousand miles away from the corporate headquarters and all their experts and equipment. It really came down to either Ontario or Oregon—and frankly Oregon sweetened the pot.

VH: Really?
HV: Oh yes. Tolkien is very popular there and the local politicos really wanted that coup under their belts. All the fees for permits got waived, for one. We’re getting a discount on our utilities. They’re giving a tax break to any local business that works on the project, and let me tell you that makes things tons easier right there. And of course they’re thrilled to have the extra income.

VH: Plus they somewhat used to having film productions there.
HV: I know some television programs are filmed there. Abyss, am I right?

VH: Yes. And some others.
HV: Plus some other movies. Yeah, it’s a good deal all round.

(February 10, 2006) Director Hadrian Voermann has announced that Oltenian actress Nicola Vlas-Florea will be portraying Galadriel in the upcoming film version of Tolkien's Lord of the Rings.

Vlas-Florea does not speak English but is taking a crash course in the language while learning both her English lines and those which are in Elvish phonetically. The 23-year-old actress is the only daughter of the reigning prince of Oltenia and has garnered considerable acclaim.

(Atlanta, Jacobia) - In a press release, film director Hadrian Voermann has confirmed that Ethan Wright, star of such films as "The Owl" and "Witchfinder At Large" has been cast as the wizard Saruman the White. The 55-year-old actor will be playing opposite Sir Iewan Meade as Saruman's opposite, Gandalf the Grey. Others in the cast so far include Nicola Vlas-Florea as Galadriel, Queen of the Elves, Viggo Peter Viggosen Mortensslækt as Aragorn, rightful king of Gondor, Beth Catensale as Arwen, Galadriel's daughter, and Johann Deppner as Frodo, the hero of Tolkien's famous epic.