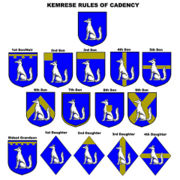 Illustration of the rules of Cadency in Kemrese Heraldry

Kemrese Cadency is a set of traditions, more-or-less established during the XVIIIth Century, to indicate specific places in birth order for those entitled to Coats of Arms in Kemrese Heraldry. In general such cadencies are not subject to inheritance. Grandchildren of those entitled to Coats of Arms must have their own arms, albeit often with some thematic continuation.

If, however, the background (or Field) is already gold, then the label should be silver (or Argent). This is the general rule followed whenever the field is the same color as the cadence.

The marks of cadency for sons are established for the eight following the eldest son/heir. It should be noted that after historically the cadencies for eighth and ninth sons are very rarely used, and perhaps for that reason are the most subject to variation:

Given the fact that Kemr uses Salic Law, less attention has been paid to female cadency. Rather than a shield, women use a diamond shape (or Lozenge). The cadency of daughters has only been worked out to the fourth daughter.

Traditionally, later daughters would receive some individual forms of cadency, although the tendency to echo those of the sons was very strong.