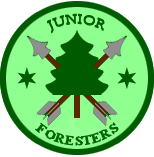 The Junior Foresters is an international youth organisation aimed at encouraging interest in nature. It was founded in 1905 by Oreganean forest ranger Pavel Badenev who wanted to help urban kids become reaquainted with traditional woodcrafts in a safe and surpervised environment.

He wrote a book, Forestry for Youth, which proved a success both at home and abroad inspiring the creation of "circles" in many other countries.

A confirmed ecotopist, "PB" (as Badenev was affectionately known) insisted that members adhere to ecotopic principles of peace and respect for nature. He also made the organisation open to all without restriction based on religion, gender or ethnicity, a courageous move at the time.

The international organisation is divided into "tribes" (at the national level), "clans" (province or large cities) and "circles" (local chapters). Some larger circles are further divided into "tents"

Within a circle, children are divided by age:

Some former Junior Foresters continue to maintain an interest in the movement after "the Lone Walk" (a ceremony marking the end of a junior ranger's activities upon reaching age 17). Some become Guiding Foresters while others volunteer part-time or make donations to the organisation.

A few, however, decided to create a new level within the organisation open to all adults. This, the Senior Foresters, perform similar activities as their younger counterparts and also engage in social events of a more mature type.

The principle of self-reliance extends to what is worn by the Foresters, since the uniform is to be made in part or in whole by the Foresters themselves. For the youngest age group, this consists simply of a bead necklace (the colours of which depend on one's circle) while the older age groups must make their own shirt (a rawhide jacket with strips of leather at the shoulders).

Many variation on this uniform exist depending on local dress although the necklace is a universal symbol of foresting.

The organisation is funded through members' annual dues, fund-raising activities and contributions from organisations such as national Ecotopic parties. Due to the connexions with latter, the Junior Foresters are sometime seen as the youth wing of the Ecotopic Parties in some countries although the two organisations share no direct links.

The Junior Foresters are famous (or some would same infamous) for selling door to door food they have made themselves using only ingredients they have grown or found. Needless to say, the food's taste (and desirability) tend to fluctuate widely between circles.

One of the most popular events of the Junior Foresters' calendar is the Solstice Ramble, which takes the form of a walk around the countryside surrounding a major city, always compassing it clockwise. It started in Siatl, Oregon, in 1951 but quickly developed into a promotion of the so-called "greenbelts". The emphasis is on having fun in a non-competitive form (the walk is generally at a steady pace, staying overnight in Adirondack shelters where need be), respecting nature, leaving no trace and health and fitness. Typically the walk is split into age groups with the youngest heading out first. The last night, usually scheduled to be the night of the solstice, takes the form of a bonfire held on the beach with a barbeque and salt roast, singing hearty songs of the Forester Movement.

The idea of the Solstice Ramble is popular amongst other groups, who unofficially perform it on similar days.

The Junior Foresters have inspired over the years other organisations who, for either political or religious reasons, could not be recognised by the International Committee.

In many predominantly Roman Catholic countries for example, an organisation called the "Croisillions" (the youth wing of the Pontifical Zouaves) fulfill a similar role although with a greater emphasis on religion.

Another example can be found in the former SNORist countries where the local circles, being perceived as "un-Slavic", were closed following the Russian civil war. They were quickly replaced with government sponsored "boy commandos" troops which adopted an overtly pro-Slavic and militaristic set of activities.

The exact relationship between Foresters and their counterpart organisations tends to vary widely. Some have earned the status of "associate" while others are treated as rivals who debased PB's original vision.

While not based strictly on Ecotopism, another organisation with similar goals of respect for nature and self reliance is the Boy's Legion, founded in 1910 in England.