James IV of England and Scotland 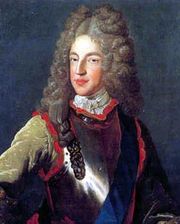 James IV and VIII (b. 1686, d. 1766) was the only son of James III and VII and came to the throne at age fifteen. As he grew older, it became clear he felt stiffled in the royal role and was known to utter remarks to the effect of wishing he'd been born to some other father. But of course, having been crowned at such an early age he went on to wear it for over six decades.

In his efforts to be more of himself, James IV adopted a personal banner and alias, travelling as "His Grace, the Duke of London." This fooled no one, but it did allow him (and others) the conceit of being treated with somewhat less deference and slightly more honesty. It also resulted in the sometimes nickname of "The Wolf King."

Although initialy uncomfortable with the role of monarch, he became quite a strong one and was able to make a non-inconsiderable impact on policy. His personal patronage could mean a great deal, and he is credited with support for Johann Sebastian Bach when the composer was in England, the reviving interest in Gouilliame Shaxepere as well as supporting the American Colony that eventually bore his name.

Married for reasons of state to the daughter of German Duke, James IV was evidently not happily married and did not form close attachments to any of this four children save for the youngest, a daughter named Charlotte. The princess never married, but remained close to her father and took up many of her mother's duties after the Queen died in 1755. It was Charlotte who insisted her father try to befriend his grandson, the future Charles III, who eventually succeeded him.