The House of Vlas-Florea is the reigning princely family of Oltenia. Moreover, members of this family are deeply involved in Oltenian politics and history on all levels.

Family legend says that the founder of the Florea line was a Knight named Dan whose arms were a flaming sword. Fleeing from enemies in the wake of a lost battle, this knight followed some bats into a cave where he found shelter and water. Henceforth, he included a bat on his arms. All branches of the Florea family have included the bat in their arms since, and the bat itself has become to Oltenia what the Eagle was to Rome or Russia, the Lion to Scotland or England and the Griffin to Xliponia.

Exactly when this knight was supposed to have lived and who he was fighting is not at all clear, although in recent years it has been popular to suppose he was fighting along side Mircea the Old (1387-1418), Voivode of Wallachia.

The actual records are a good deal less concrete. What seems certain is that a Chronicle written during the reign of Vlad II Dracul there is a reference to a knight called "Dan the Bat" and another to a knight named Dan who wielded "a burning sword." Both these are taken by the Florea family and many Oltenian historians as references to the same man and the arms of the main Florea branch.

Certainly by the 16th century there are references to the Florea family and their bat sigil throughout documentation regards Wallachia, Moldava and Transylvania (but mostly Wallachia). They were clearly boyars at this point, wealthy officials and landowners. 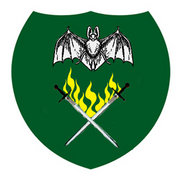 Historically, the would-be Voivode-ship of Grigore Florea in 1674 had the greatest impact of any of that house. This was at a time when Oltenia was under the dominion of the Ottoman Empire but a movement towards independence was growing up among the younger boyars. This was in many ways fueled by the steadily increasing tax burden (often as much as 80% of a land's income, sometimes more) as well as the Sultan's increasing interference in what had been considered internal affairs.

Grigore (born 1643 died 1674) was orphaned at age five and so was raised by his cousin Matei Vlas-Florea, a boyar of considerable wealth who had three sons of his own. Matei's eldest, Micolai, became close friends with Grigore until both began to court the same the same woman, Erzebet. it was Grigore who won her hand became the father of her only child--Matei Grigorescu.

By all accounts, Grigore was a charismatic and brilliant leader to whom many of the younger generation listened. He hated that the Ottomans remained overlord of his homeland, and in 1673 raised his banner as Voivode of a new, independent Wallachia. This was in response to the death of Voivode Alexandru II. By tradition, the boyars selected the new Voivode but Alexandru had been appointed by the Sultan nine years earlier. Grigore urged others to assert their traditional rights.

In fact, his support was almost exclusively in the northwest part of the country, but there is was solid and deep. An army swiftly rose to defend Grigore's "rights," and those boyars who were not his followers did not feel particularly inclined to oppose him.

Of course, the Sultan felt differently. He began preparing forces to crush the rebellion almost immediately. The one real battle between the forces ended in a draw as a thunderstorm swept across the battlefield. How things might have fared next is uncertain, although surely the odds favored the Turks. It little mattered, for none other than Matei Vlas-Florea himself betrayed Grigore, leading a contingent of troops directly into Grigore's capital at Braşov. Grigore was killed fighting. His bride was murdered, possibly raped, and his two-year-old son had his head crushed. The cause of an independent Wallachia or Oltenia died with them.

Matei was appointed the new Voivode.

As a matter of record, Matei Vlas-Florea died suddenly almost exactly one year to the day from the date of Grigore's murder. He fell very weak and within hourse simply stopped breathing--a form of death that would coincide what many suggested at the time. Many Oltenians believe to this day that Micolai Vlas-Florea avenged the death of his friend and the woman he loved by poisoning his father with hemlock. Whatever the truth, he certainly altered the family coat of arms. He had the chevron changed from purple to blood-red.

Whatever the truth, the story lent an aura of peculiar mystery and power to the entire family aftewards. The Voivodes who in fact were of the Vlas-Florea line tended to have greater prestige as a result.

Micolai did not succeed his father. That title went to his brother Petru although later Micolai's grandson Iulian became Voivode for a time (this was a period when purchasing the title of Voivode was more-or-less the rule, which virtually bankrupted the title). 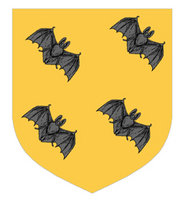 All three (then) extant branches of the Florea family were involved in the 1869 uprising that resulted in a revived Hungary. However, agitation for independence from Hungary was not long behind. By now the old divisions of Romania had reshaped themselves into Oltenia, Muntenia and Moldova. The Floreas, but especially the Vlas-Floreas, were widespread leaders of the ideal of Romanian Nationalism.

At this point the rivalry between the Vlas-Floreas and the Florea-Doneascus began in earnest. Leaders of both houses had served with distinction in the Anti-Ottoman Uprising.

Vukan Nicolescu Florea-Doneascu (1825-1899) and Bela Vlas-Florea (1831-1901) were officers who served together and joined in the fight against the Ottomans. Both distinguished themselves, and according to some records (as well as family legend) they were at one time friends. Yet this seemed to have to ended over a duel fought in 1851 over an incident wherein one appeared at a social gathering with orders that the other report to their commanding officer. Again, who did what is not clear and the two branches of the family disagree. However, the duel resulted in both of them being shot. Both recovered, and became rivals for the rest of their lives.

In something of a romantic twist, Vukan's daughter Raina fell in love with Bela's son Mihail, later first Prince of Oltenia. Unfortunately, he did not return her affections and she committed suicide. Vukan claimed she did so because she was pregnant with Mihail's child, a charge the young man furiously denied. Later, on his deathbed, Vukan claimed to have seduced Bela's wife and that Mihail was in fact his own son, and a bastard. This did nothing to encourage peace between the two families.

During the course of the winter of 1915-1916, Oltenian rebels gradually rose in open rebellion against Hungary, and by April 1918, Oltenia was established as an independent state.

The leaders of the rebels came mostly from the three different branches of the Florea family, whose bat sigil became identified with the movement for Oltenian independence. Specifically, the flaming sword of the Voivode Grigorr was joined with the bat to become the bat surrounded by flames. At this point the following members of the Florea family became Princes of Oltenia:

Upon the establishment of an independent Oltenia, several items were designated as the Regalia of the Prince. They were and are:

Of course the most famous member of either famly is the current prince Prince Igor Nicolescu (born 1949). He has one child, a daughter named Nicola (born 1982), who has become rather famous herself as film actress.

Igor's nephew and heir is Nicolae Vladescu (born 1965), who is in the diplomatic service. Currently, he is Oltenian Ambassador to England. His father, Vlad Nicolescu, suffers from diabetes and has retired from public life. In his youth, he was a successful army officer, rising the rank of Major.

Alexandru Raduescu Florea-Doneascu (born 1954) is the current deputy leader of the Conservative League, one of Oltenia's three major political parties.